In tonight's episode, we see David trying to strangle Bhoorey Lal for flirting with Helen. Read on for details. 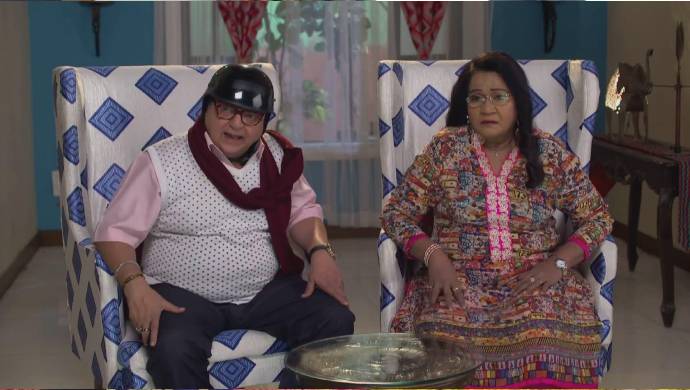 In tonight’s episode of Bhabi Ji Ghar Par Hain?, we see Anita telling Angoori to make the latter’s father behave himself. To this, Angoori replies that doesn’t understand what Anita is trying to say. Meanwhile, at the police station, Happu asks for money from Bhoorey Lal and Helen to bail them out. Helen refuses to give any money to Happu. He feels insulted and tells the police to put them in the lockup. Bhoorey Lal asks Happu to call Commissioner Resham Pal instead. Happu smirks and says that the Commissioner was caught in the garden and submitted money to bail himself out scot-free. Meanwhile, Manmohan hands over money to Happu and asks him to let Helen and Bhoorey Lal go. Happu is unhappy with the amount of money he receives and asks for more.

A while later, Manmohan and Vibhuti are having a conversation over who’s wrong between Helen and Bhoorey Lal. Just then, David enters and interrupts there conversation. Later, an angry David threatens to trash Bhoorey Lal if he tries to mess with Helen. David tries to strangle Bhoorey Lal. The two then begin to fight. Angoori notices the commotion and calls everyone out to stop the fight. Vibhuti and Manmohan try to intervene. Anita bashes the two for quarreling like kids.

Later, Bhoorey Lal and Helen reveal that they are not in love but are just two individuals enjoying each other’s company. Bhoorey Lal says that Vibhuti-Anita, Manmohan-Angoori will realize this only after they get older like them. Anita-Vibhuti and Angoori-Manmohan realize their mistake.

In the upcoming episode, we will see both Anita and Angoori refuse to celebrate Holi this time. Manmohan and Vibhuti are worried that they won’t get to enjoy Holi either. Vibhuti plans to make both Angoori and Anita play Holi with them. He asks Manmohan to be his partner in selling the eco-friendly colors for Holi. Meanwhile, two unknown men plan to ruin the colors made by Manmohan and Vibhuti.