Watching this avatar of Angoori Bhabi both Vibhuti and Tiwari gets petrified. 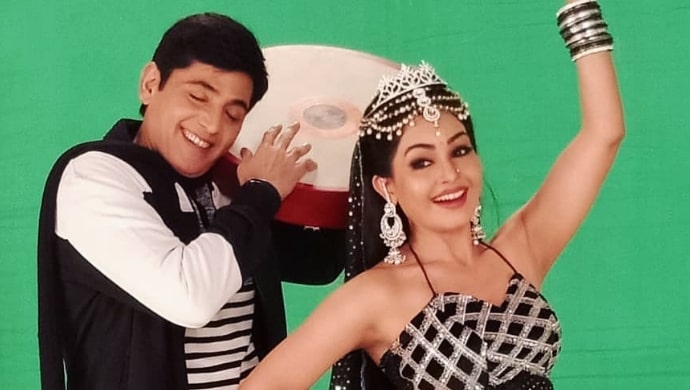 In the previous episode of Bhabi Ji Ghar Par Hain we saw, Vibhuti takes invites Bhoorey Laal to have drinks with him. Happu Singh continues to make Tika, Tilu and Malkhan do his personal work and treats them as servants calling it as a part of their training.

In today’s episode, Bhoorey Laal asks Vibhuti that why is he trying to impress him. Vibhuti then tells him that he has satisfied Angoori Bhabi with his skills. Bhoorey Laal gets shocked hearing this and asks Vibhuti to clarify. To which Vibhuti tells him about how he made Angoori Bhabi dance on his tune of Dafli. After hearing this Bhorey Laal gets angry and slaps him. Vibhuti questions him that why did he slap him instead of feeling happy? Suddenly Tiwari comes in the scenario and asks Bhoreey laal to beat him again. He also says that his wife Angoori will only dance on his dafli because he has learnt how to play dafli from an expert. Hearing this Bhoorey Laal slaps Tiwari too.

Bhoorey laal then tells them the story of what happened with Angoori. Once upon a time, there was a guy named Mastram who used to play dafli and make Angoori dance on it. But one day he got an injury on his hands and he was not able to play dafli but Angoori who was addicted to dancing on dafli threatened him to play dafli else she will kill him. Seeing this with her madness for dafli, Mastram ran away from the village and went to Ludhiana and started playing dhol.

Tiwari and Vibhuti shocked after hearing this, ask him why and how did that happen but then Bhoorey Laal tells them that he will tell the whole story later but for now if they play dafli in front of Angoori then they will be responsible for their own death.

Saxena comes into the picture and takes Tiwari saying he has committed him that he will teach Tiwari to play dafli in a month. Tiwari tells him that he no more wishes to learn dafli Saxena takes a hunter and asks Tiwari to start practising to play dafli.

In the end, Angoori goes to Vibhuti’s house at night and wakes him up from sleep and threatens him to play dafli.