Vibhuti and Manmohan have an idea to disguise themselves as 'Daaku' to remove Angoori's 'Dafli' fear. 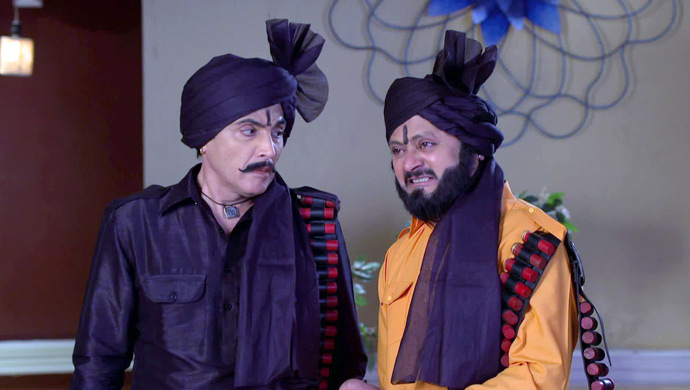 In the previous episode of Bhabi Ji Ghar Par Hain we saw, Angoori goes to Vibhuti’s house at night through the balcony and wakes him up from sleep. Surprised to see Angoori at night, Vibhuti asks her why has she come. She then tells him that she feels like dancing and asks Vibhuti to play dafli. Vibhuti rejects to do so but Angoori then asks him to come with her by threatening him with a knife.

In today’s episode, Angoori brings Vibhuti to her house and asks him to play dafli to which Vibhuti says that it is illegal to make someone play dafli without their wish. Angoori then hurts Vibhuti with the knife and forces him to play dafli. After hearing the sound of dafli, Tiwari comes running and stops Vibhuti from playing dafli and both of them run into a room and lock it from inside. Angoori then comes to the locked door and scares both Vibhuti and Tiwari. Suddenly, Saxena comes into the room tells Tiwari to play dafli or else he will punish him as a teacher. As soon as Tiwari starts playing dafli, Angoori starts dancing.

Next, day Tiwari and Vibhuti are seen sitting near tapri and discussing what should be done to control Angoori’s obsession with dancing on dafli. Bhoorey Laal comes near the tapri and tells Tiwari and Vibhuti that he just met Angoori and he can’t see her in this situation. Vibhuti and Tiwari ask him that what is the story behind Angoori’s obsession. He then tells them about how did it all start. One day few bandits came to rob Bhoorey Laal’s house in the village and saw a dafli and started playing it and asked Bhoorey Laal to dance on it. Left with no choice he started dancing as he was asked to do so on the gunpoint. Angoori, who was a little child then saw her father’s helplessness and she requested the bandits that she will dance instead. But she was so scared that she fainted and from then onwards whenever she hears the sound of dafli she starts dancing. Vibhuti then tells Bhoorey Laal that he has a plan.

In the next scene, Tiwari goes to meet Anita to ask about her health and brings her fruits. Anita, tells Tiwari that the fruits are not fresh and they injected with harmful chemicals. Tiwari gets disappointed but while leaving Anita asks him to bring her piszza instead.

The episode ends with Happu Singh counting the cash he took from everyone and while doing so Tika, Tilu and Malkhan stand in front of him and ask Happu Singh to return their cash else they will tell the commissioner about the bribe Happu Singh took to get them a job. Happu Singh then returns their cash.

The Sholay Girl: 5 Reasons Why The Story Of India's First Stunt Woman Is A Must Watch