In tonight's episode, Anita comes to know about Tiwari and Prem's plan to threaten Vibhuti and she makes them apologise to the workers. 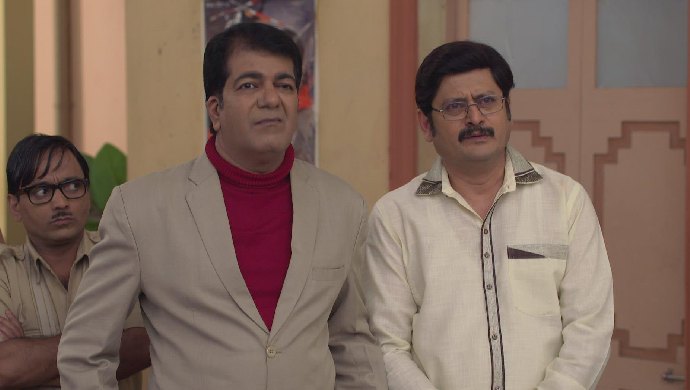 In the previous episode of Bhabi Ji Ghar Par Hain, Vibhuti feels dizzy and goes to Angoori to asks for coffee. He sees that Angoori is sleeping so he goes out to have coffee. There he sees Prem and Tiwari talking about firing the workers from their jobs so that they won’t have to give a share in the profit. Prem and Tiwari call Vibhuti in a restaurant and tell him to stop the drama and take his share from the profit to keep his mouth shut. The latter refuses to do so and says that he will never betray his friends.

In tonight’s episode, Prem suggests Tiwari to give money to a goon to threaten Vibhuti. Later, the goon named Rocky meets Vibhuti and threatens him to take his strike back or else he will have to face the consequences. When Vibhuti refuses to do so, Rocky and other goons beat Vibhuti and tell him that Anita Mishra had sent him.

Vibhuti comes home and blames Anita for being with the management. Anita clarifies that she has not done anything but the latter refuses to listen to her and leaves the house. Next day, Vibhuti and other workers request Happu Singh to take action against Tiwari, Prem and Anita but he says that he cannot do anything about it.

7 Dialogues From Kaafir That Beautifully Capture The Meaning Of Love, Freedom,…

Later, Anita comes there with Tiwari and Prem and asks them to confess their fault. A few moments later, Tiwari gets a call from his business partner who gave him the order. He says that due to some circumstance the order has been cancelled. Everyone gets upset and return to their home.

In the preview of the next episode, Tiwari and Vibhuti discuss about a lady who is manipulating their wives and provoking them.