Vibhuti's love for Tiwari faces opposition from everyone, including Tiwari himself. 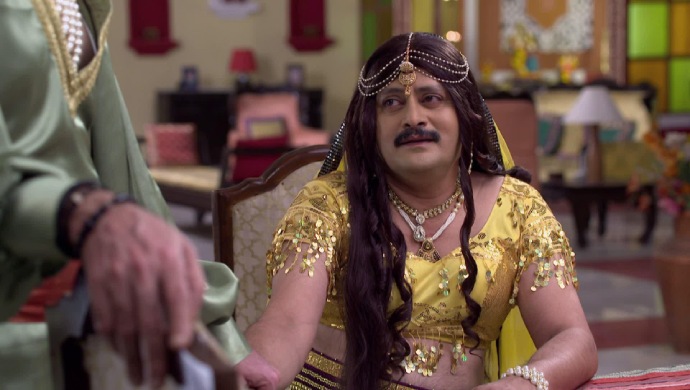 In the previous episode of Bhabi Ji Ghar Par Hain, Angoori tells Vibhuti about her ideal romance. She wants her love story to be like Laila-Majnu. Vibhuti sees Saxena reading a book which turns the reader into Majnu. Vibhuti borrows this book and plans to become Majnu to Angoori’s Laila. However, he sees Tiwari instead of Angoori and falls in love with him instead.

In tonight’s episode, Tiwari is still shaken after seeing the way Vibhuti behaved with him in the morning. He is rude to Tiku and Malkhan who are now his servants. Angoori asks him the reason for his bad mood. Tiwari tells her how Vibhuti was holding his hand and kissing it. He tells her that this happened when he went out to the do the tulsi puja.

Just then Vibhuti shows up at the dining table. He holds Tiwari’s hands and tells him how much he loves him. This scares Angoori and Tiwari. Vibhuti on the other hand imagines Tiwari as Laila, who is in love with him. Tiwari calls Tiku and Malkhan to take Vibhuti out of the house.

Tiku, Malkhan leave Vibhuti at the gate and tell him to stop whatever he is doing with Tiwari or they will have to beat him up. For Vibhuti, living away from Tiwari, his Laila, is unbearable. He refuses to listen to Tiku and Malkhan.

Saxena shows up when he sees the commotion. He looks at Vibhuti and understands that he is in that condition because of the book. He asks Vibhuti who he is in love with. Vibhuti turns toward Tiwari and calls out ‘Laila!’.

Saxena explains the situation to Tiwari. He tells him that the book made Tiwari fall in love with the first person he seen after reading it. Tiwari and Angoori are surprised by this fact. Tiwari asks Tiku to stop Vibhuti from entering in.

However, later that night, Tiku falls asleep when Vibhuti climbs up to Tiwari’s bedroom.  He puts a pair of payal on Tiwari’s feet. When Tiwari wakes up next morning he is taken by surprise. How will Tiwari reject Vibhuti’s advances? Stay tuned to find out.

Katrina Kaif Is More Interesting On Social Media Vs In Real Life: Varun Dhawan On Pinch