Vibhuti gets down on a station named Gunnour and meets a station master who could be a ghost. 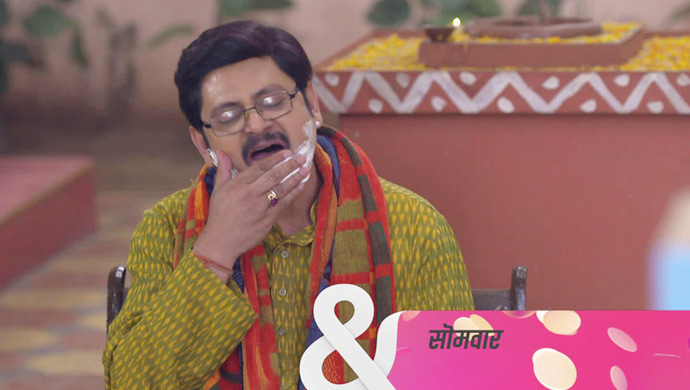 In today’s episode of Bhabi Ji Ghar Par Hain, we saw Vibhuti and Tiwari disguise as the bandit to remove Angoori’s fear which used to make her dance on the tunes of dafli. Tika, Tilu and Malkhan finally decide to not get fooled anymore by Happu Singh and get their money back by threatening Happu Singh to tell the commissioner about the scenario.

In the preview we saw, Tiwari talking about a parcel of his Kachha Baniyan to be delivered to a place called Dumargad. Angoori then asks Vibhuti if he can deliver the parcel to Dumargad. Vibhuti agrees to do so by saying he is only doing it because Angoori is insisting him to do so.

In the next scene, Vibhuti gets down from the train at night at a station named Gunnour. He then comes near the station masters office to ask if there is any tea stall near the station. The door of the station master’s office open automatically and a ghostly figure stares at him and asks him for the ticket. Watching this Vibhuti get scared and runs to board the train but the train is already started. The ghostly figure is then seen coming out and the preview ends with the name of the station with blood on it and a voice of someone screaming is heard in the background.

What do you think, will Vibhuti be able to catch the train? Let us know in the comments section below.