Tiwari plans a rain dance party to further tempt Vibhuti to give up the water protest. 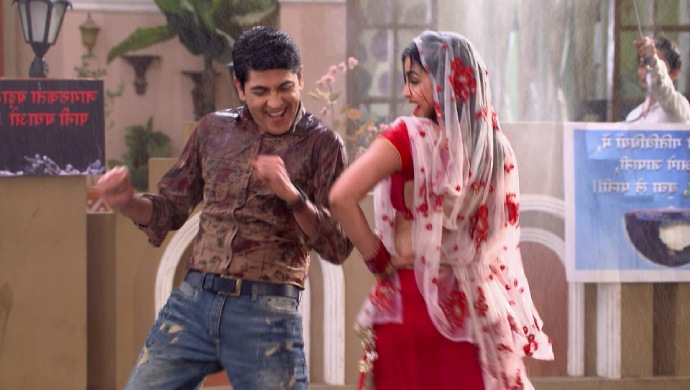 In tonight’s episode, Angoori scolds Tiwari for trying to make Vibhuti jealous and give up the protest. Later when she is giving Vibhuti food, she gives them a tiffin hooked on a big stick so she doesn’t have to go close. When Vibhuti asks her the reason for using the stick, she says that he is stinking after not having a bath, so she is keeping away.

Later, the commissioner come to the police station. He tells Happu Singh that Daddu ji will be visiting Vibhuti. Happu Singh has to provide enough security for Daddu ji. Vibhuti’s protest is inspired by Daddu ji and even Angoori is his fan. They are happy to see Daddu ji supporting their protest.

Daddu ji tells the reporters and media that he supports Vibhuti and his protest. However, he takes Vibhuti aside and tells him to stop the protest. Daddu too had started a protest to just impress a girl once. Since then, everyone has been making him sit on one protest after another. He tells Vibhuti to stop before it is too late.

He tries to make Happu Singh give him water. Saxena knocks the bottle of water away and takes over as the leader of the protest. He stops Vibhuti as well as Tika and Malkhan from giving up on the protest. The next morning Angoori is enjoying at the rain dance party in front of Vibhuti. Because of Saxena, Vibhuti is forced to sit at the protest. Stay tuned to find out how much longer Vibhuti’s protest lasts.