In tonight's episode, a chimpanzee bites Vibhuti's buttocks while clicking a selfie and he starts behaving like a chimpanzee. 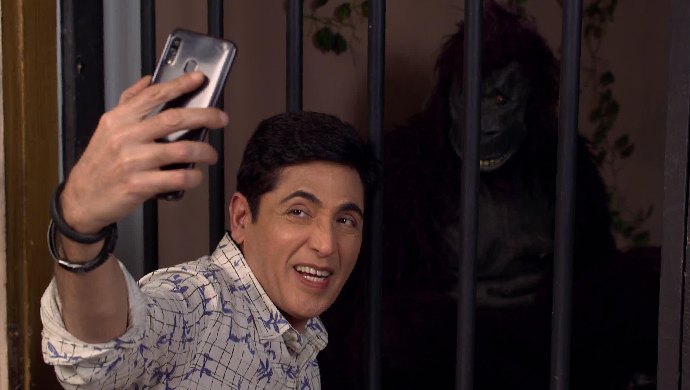 In the previous episode of Bhabi Ji Ghar Par Hain, DK goes to the graveyard and starts digging the place where he had buried Roxy. Just then Anita and Happu Singh come there and arrest DK for killing Roxy. Anita reveals that Roxy was her friend and a few days before she had a conversation in which her friend told her about her boyfriend’s car. She had a doubt on DK and to prove that she made a plan with Happu Singh.

In tonight’s episode, Vibhuti sees Angoori standing in the veranda and comes there to have a chat. While they are talking, Manmohan comes out half naked saying that the monkey took his clothes. A few moments later, Anita comes there and feels awkward to see Manmohan without clothes. Happu joins them and everyone complains hi to do something about the stray monkeys.

Later that day, Vibhuti asks Angoori when was the last time Manmohan took her out. The latter replies that she wishes to go to a zoo but Manmohan is so busy that he never takes her out. Just then, Manmohan comes there and asks Vibhuti to take Angoori with him and Vibhuti agrees to it happily.

Prem offers a new job to Tika, Tilu and Malkhan to catch stray monkeys. Vibhuti and Angoori enter the zoo and see different kinds of animals. Angoori asks Vibhuti to click a picture with the chimpanzee. The latter goes near the chimpanzee and teases him. The animal gets violent and bites Vibhuti’s buttocks.

The doctor tells assures Anita that there is no need to give injection to Vibhuti because he is totally fine. Later, Vibhuti starts scratching and making sounds like a chimpanzee and seeing this Manmohan laughs on him.

In the preview of the next episode, Vibhuti starts behaving like a chimpanzee. Angoori tells Manmohan that he has to bath in a pond without clothes to be safe from monkeys. Just then, Vibhuti comes there and takes Manmohan’s clothes and runs away.

Jamai 2.0: 7 Stunning Photos Of Nia Sharma Which Show Her Eyeliner Game is Always On Fleek