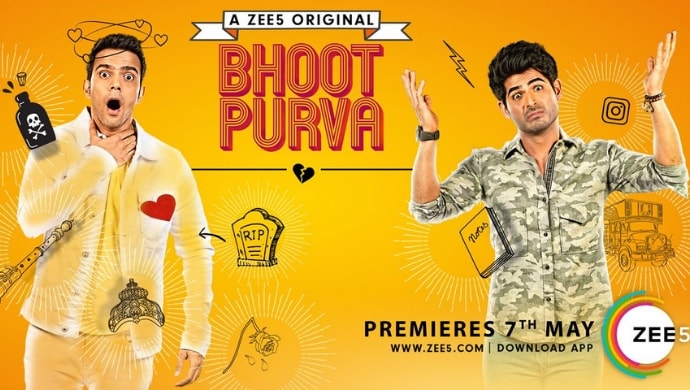 After keeping you hooked and booked with gritty thrillers (Abhay, Parchhayee, Poison etc), ZEE5 is ready to make you laugh this summer! The platform is coming up with another original series titled Bhoot Purva, set to stream 7 May 2019 onwards. Starring Pyaar Ka Punchanama fame Omkar Kapoor, Rishab Chadha, rapper Baba Sehgal, the digital project traces the story of a friendly ghost Aarav who befriends Purva.

The trailer of the horror comedy was recently dropped on ZEE5. Watched it yet? Check out below:

The one and a half minute long teaser video features Omkar as Purva, who is perceived as a good-for-nothing chap and Rishab as the ghost who returns to fulfill a wish. The series revolves around Purva helping Aarav to complete his hopelessly romantic love story with an ex-classmate, Angelina, played by Zoa Morani. In exchange for his help, the ghost offers to help a jobless Purva clean up the mess in his own life. Baba will be seen as Mythogram Yamraj, a quirky twist to the usual role of a Yamraj seemingly. Yamraj accompanies Aarav everywhere!

For those unaware, Zoa is the daughter of filmmaker Karim Morani. She made her debut with Shah Rukh Khan’s film Always Kabhi Kabhi and also starred in Kunal Kemmu‘s Bhaag Johnny. Rishab, on the other hand, has previously shared screen space with Sonam Kapoor Ahuja in Khoobsurat. He also appeared in Ajay Devgn‘s Drishyam. The web series shall also star Anil Charanjeett, Jayati Bhatia and Manu Rishi Chadha in important roles.

Jayati and Manu shall play Purva’s parents in the digital project. Jayati, star of Zee TV shows like Kaise Kahoon, Sinndoor Tere Naam Ka and Mamta, will be making her digital debut with the series. As for Anil Charanjeett of Namaste England and Simmba fame, the actor shall probably be seen as Purva’s neighbour who only means harm to him.

Produced by Friday to Friday banner, Bhoot Purva is helmed by Zeishan Quadri.

With a crazy Yamraj for company, can Purva help Araav accomplish his goal? Find out on 7th May.

Sunny Leone To A Troll On Her Kids' Career: I Doubt They’ll Work In Adult Entertainment