The arranged marriage scenario and the understanding between a couple is explored with an example of a 'fart'. Read on to know more about this rom-com 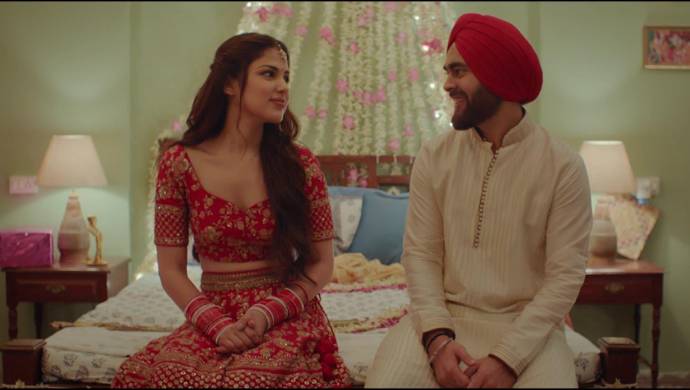 A bride in her exquisite lehenga, Rhea Chakraborty pulled off the bridal look with extreme elegance. But the bride drinking ENO? The first scene of the film unravels a not-so-normalised scenario where the bride is suffering from bouts of gas and acidic trouble in her stomach. The wedding night or suhaag raat is the most hyped part of marriages on and off-screen. While the entire family awaits and teases about this part of a marriage, it is difficult to understand why it is put up on a pedestal when it is just the union of two bodies that have been bound by the union of marriage!

Watch the trailer of the film here.

While the film breaks the stereotypes of how a bride should be, Manjot Singh playing the role of the groom also delivers a strong message. The bride can be seen having trouble opening up which has been symbolised as a ‘fart’! The fart is stuck inside her system and is not letting her feel comfortable. She tries various ways including trying to escape, using the washroom and making up excuses like turning the volume of songs up so she could pass the gas. Meanwhile, the lights go off for a while and the groom passes a loud fart making her feel embarrassed.

But the groom is not embarrassed and this is the beginning of a debate between the husband and wife as to why the wife cannot be as free as her husband. The groom permits her and encourages her to fart but age-old disciplines make her conscious and she is unable to do so. Though it can later be seen that she farts in her sleep, the groom still hugs her taking the fart into zero consideration. Boom Boom is a classic tale of societal conditioning and a satirical drama about the ways we have been taught and conditioned into feeling shameful of certain natural acts like farting.