Get into the patriotic mood and bask in the love for your country with Saare Jahan Se Acchha and other new-age songs from The Tashkent Files. 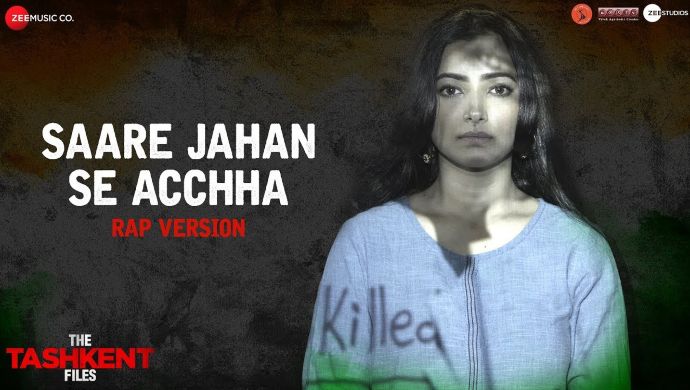 The Tashkent Files is a conspiracy thriller film about the death of former Indian Prime Minister Lal Bahadur Shastri. Written and directed by Vivek Agnihotri, the movie stars Shweta Basu Prasad, Naseeruddin Shah and Mithun Chakraborty in lead roles. As India celebrates its 73rd Independence Day on 15th August, even The Tashkent Files premiers digitally on ZEE5 the same day! Let’s celebrate our country and revel in the spirit of patriotism with songs from the movie. Although the flick doesn’t have many songs, it does use rap and rock to put forth a message, very brilliantly so if we may add.

Another number from the film is Sach Chalta Hai, which has been made in Electronic and Rock versions respectively too. The lyrics of this song strike a chord, speaking directly to the listener about a web of lies. It is of prime importance since Shastri’s death under mysterious circumstance gave birth to several conspiracy theories. He died hours after signing the ‘Tashkent Declaration’ ending the Indo-Pak 1965 war. Although the cause of his death was said to be a heart attack, many including his family believe otherwise.

Rest assured, you will walk away learning more about Indian politics after watching The Tashkent Files, thus, the film is a must-watch for every Indian!