Singer Divya Kumar talks about recording the Sahas Ki Vijay song from State Of Siege: 26/11 one day before the country went into a #lockdown. 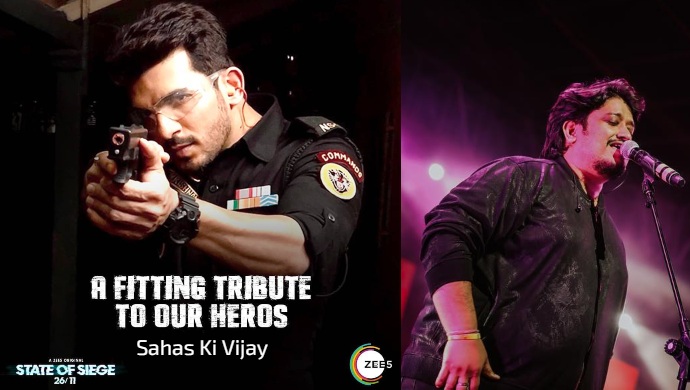 State of Siege: 26/11 stars Arjan Bajwa, Arjun Bijlani and Vivek Dahiya in leading roles as NSG Commandos. The series tells the story of the 26/11 Mumbai attacks from the perspective of The NSG and it is only fitting that the series also had a new anthem for the NSG based on their own motto ‘Sahas Ki Vijay‘. Divya Kumar lends his powerful voice to this song which is his last recording before the Coronavirus lockdown. He agreed to speak to us about the song and we are not surprised to hear his ringtone is his most popular song ‘Jee Karda’ from Badlapur.

1. How did you become part of this project and how excited were you for it?

Ravi Singhal called me up for the song and asked me if I would like to do it. I went to his studio and heard the song first. This was in the afternoon and the show was going to release that evening itself. So he immediately told me what the song was about. When I found out it is about the NSG I was honoured to be able to sing the song.

2. What emotions do you feel this song will make people feel?

I think this song will inspire people. It will inspire them to to be brave and patient during the Coronavirus scare. It will help them become more like the NSG and live by the Sahas Ki Vijay motto which I think is really good.

3. How are the early reactions to the song?

I don’t know about the reactions to be honest. I have taken a kind of sabbatical from social media. I was already off most of the platforms and now I’m off Instagram also for a while because I have nothing new to post. But getting back to the question, I haven’t seen the reactions on social media, my manager does that. My family has heard the song and they really liked it.

4. This is your second collaboration with Ravi Singhal for ZEE5 after Rangbaaz Phirse which was also a kind of rock song? How were these two projects different?

Rangbaaz Phirse was in the same zone musically but it was a different space. There the song was glorifying a person who could be a hero or a villain and a grey character in general so there’s a different tone to the song. Sahas Ki Vijay is strong and patriotic and it’s about fighting against evil so it’s very different.

5. Which one did you enjoy more?

I think Rangbaaz was a better song because of the way it was made. The composition of Rangbaaz has a good melody and tune to it. Otherwise, the two songs are very different so I cannot have a favorite. Sahas Ki Vijay has a good melody in the antara but apart from that it is all about josh and energy and not that much on the tune.

6. While you sang in Rajasthani for Rangbaaz Phirse you also sang in that language for Thare Vaaste in Parmanu. Do you enjoy singing more songs in your language?

I am a Rajasthani and yes I enjoy singing songs in Rajasthani and Marwari. However, both these songs are more with Hindi words and only a Rajasthani accent. I think any singer can get a hang of this accent even if they don’t know the language. Singing in other languages is fun and another learning experience in itself. I also sing songs in 8 languages. When you get into Tamil and Telugu songs that is a whole other challenge in itself.

7. Can you tell us what kind of songs you love to listen to and five songs on your playlist right now?

I love listening to old songs and ghazals. From nowadays singers I like to listen to mostly Arijit Singh and of course, Amit Trivedi and Shankar Ehsaan Loy. I love Mohammed Rafi songs and I think he was one of the best singers we’ve ever had. When I comes to favourite songs I like Ram Teri Ganga Maili by Suresh Wadkar and Dil Hai Chota Sa from Roja. I don’t have a playlist as such I play whatever music I feel like listening to.

Shoaib Kabeer On Playing Kasab And 'Making Of A Jihadi' Episode In State Of Siege: 26/11

Meet The Characters Of ZEE5's New Dramedy, 'Who's Your Daddy'!