Be it Angoori Bhabhi or Daroga Happu Singh, their expressions will tickle your funny bones. 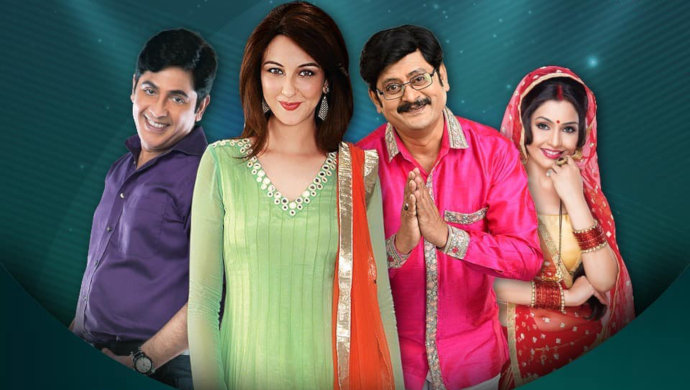 Bhabi Ji Ghar Par Hain is undoubtedly the most entertaining TV series that tickles everyone’s funny bones. There are various reasons behind the immense popularity this show enjoys. Be it an interesting plot, hilarious dialogues or the characters who have their own unique style and funny expressions. When it comes to the mention of funny expressions, be it Angoori Bhabhi or Daroga Happu Singh, each one of them leaves the viewers in splits with their histrionics. So, we could not help but find a resemblance of these funny expressions of your favourite characters with the fun emojis on social media. Check them out.

As someone corrects her vocabulary, it is followed by a cute and innocent smile on her face and saying her iconic line, ‘Sahi Pakde Hai!’ This smile of Angoori Bhabhi can easily match up to our favourite emoji and how. Just like the one in the above picture.

The entire star cast is fun to watch, have a look:

Though generally, Anita Mishra says (in her angry mood) that, ‘Read My Lips’. But, here on matching her expression perfectly with this emoji, we would like to change her line, and give a shout out to her fans asking, ‘Isn’t that just perfect?’

When Vibhuti Mishra apologises, he says, ‘I am sarry… I’m really… really … sarry’. And this is the similar emoji that comes to our minds after looking at his funny way of saying it.

Uff…it can’t get better than this.

To recall this humorous expression seen on Daroga Happu Singh’s face, you don’t need to think hard. It automatically comes in front of you. Indeed, this is the emoji that matches up to Happu Singh’s epic expression flawlessly.

Looking at Saxenaji’s way to express his joy of madness, this emoji perfectly suits the expression when he says his iconic line, ‘I Like It!’

Let us know whose expressions did you like the most.

Watch Tamashree, A Story Of A Young, Perfectionist Woman Claims To Be Dating A Tomato