In tonight’s episode, Tulsa and Manjula get gifts for winning the competition for their right to education. Bhim gets a new surname from Guruji! 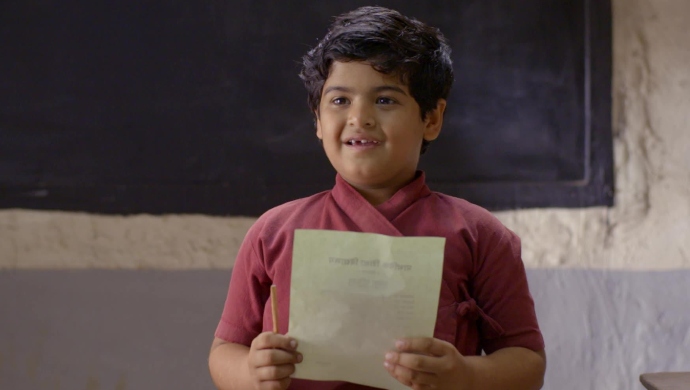 In tonight’s episode of Ek Mahanayak – Dr B. R. Ambedkar, while Guruji is walking down the road to go to school, the village men stop him and threaten him with being thrown out of the village. But Guruji answers that he is not scared because his education will stand by him wherever he goes. He asserts that the knowledge from books is valued everywhere in the world! His statements enrage the village men.

A few girls from the village wrap presents for Tulsa and Manjula for winning the competition and giving them the hope of going to school one day. The girls can’t go by themselves as the men will rebuke them if they see them. So, they hand the gifts to Bhim and Anand, who are on their way back home, after being denied groceries at the shops because of their sisters’ recent victory as well as their lower caste!

When Bhima Bai and Bua look at the presents, they feel that times are changing for the better. Meanwhile, in a village girl’s house, her father fights with her mother over not allowing her the right to education. The man starts beating up the girl, but her mother defends womanhood as well as girl child education. When Ramji is at work, a man comes and asks for donations so that India may be independent of the British.

Later, Bhim and Anand go to school to appear for their exams. When Guruji asks them to fill their details on the answer sheet, Bhim has his doubts about his last name because it identifies his scheduled caste. On asking Guruji, he gives his own surname to Bhim. So, “Bhimrao Ramji Sakpal Ambavalkar” becomes “Bhimrao Ramji Ambedkar”. Bhim experiences extreme pride and thanks Guruji for his generosity!

Exclusive! Sandeep Unnithan: #StateOfSeige2611 Is A Post-Mortem Of The 2008…

Sandeep Unnithan: 26/11 Terrorists Wanted To Attack The Building My Parents Lived In