In tonight’s episode, Ramji and Bhima Bai return from Bombay, only to learn that Bala has run away and their house was almost destroyed! Read more! 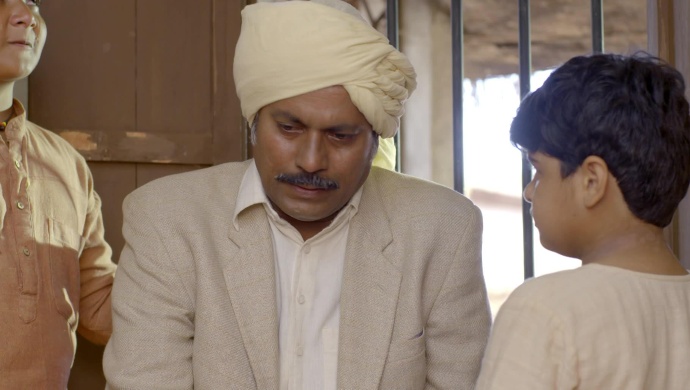 In tonight’s episode of Ek Mahanayak – Dr B. R. Ambedkar, after the villagers leave Bhim’s house, the good pandit compliments him for holding up a mirror of their own hypocrisy to them. He calls him a social reformer (samaj sudharak) and says that despite being a young boy, Bhim’s thoughts are mature and modern. The pandit declares that Bhim will free religion from the shackles of those hypocrites one day!

Ramji and Bhima Bai return from Bombay after showing the latter’s condition to the city doctor. As soon as they enter home, their children hug them and weep uncontrollably. Bua reveals that Bala has run away from their house to find a job and earn money in order to support their poor, lower caste family. Ramji reads the letter that Bala had left and tears up. He regrets that he could not educate his eldest son!

Bhima Bai laments about her incompetence as a mother. But Bhim tries to calm her down, saying that Bala will find a job and come back soon. Anand, Bhim, Tulsa, and Majula provide their mother with emotional support by hugging her tightly. Then, Bua asks Bhima Bai about the doctor’s opinion of her fatal illness. The latter replies that she has been put on medication for six months until a further follow-up.

A restless Bhim goes to Ramji with a lot of questions, who says that he will get all his answers through education. When Bhim and Anand go to school, a few boys mock them for their runaway brother Bala. Guruji rebukes them and asks Bhim about the matter. The boys then say that men who run away from their home end up as drunkards and ruin their lives. But Guruji gives Bhim the hope of a better future for Bala!