In tonight's episode, Bhim and Bala together, catch a thief. Details inside. 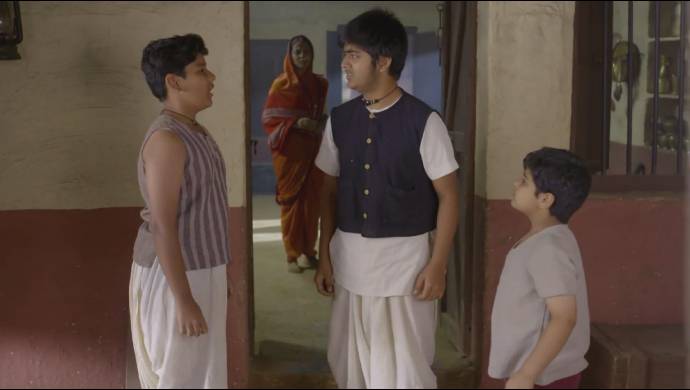 In tonight’s episode of Ek Mahanayak Dr. B. R. Ambedkar, we see Bala saying that he will continue to pursue his passion for playing an instrument. Bhim and Ganga try to convince Bala to return home, as they think that he will suffer due to the cold. Just then, a commotion occurs and we see a thief running, as people chase after him. Bhim does the same and Bala follows his lead. Ganga hides behind a tree. The people who are running behind the thief, come across Ganga, who seems to be hiding. They accuse her of stealing the jewelry. Ganga pleads that she is not guilty, and asks them to forgive her. The people decide to call her father Ramji, so that she can confess.

Meanwhile, Bhim and Bala, who are running behind the real thief, finally catch hold of him. Turns out, it’s the same thief who had stolen from their home. They tie and pick him up. Then, we see Ramji and Bhima Bai at the same spot, where Ganga is caught. Bhim brings in the real thief and presents them with the stolen jewelry.

Then at Bhim’s house, we see Bhima Bai convincing Ramji, that Bala will give up playing the instruments and asks Ramji to let Bala stay. Bala is adamant and says that he will not give up his passion. Ramji orders Bala to go away from their house. Later, we see Bhima Bai asking Bala to come inside the house. After a while, Bala tries to leave the house again. Anand and Bhim try hard to stop him. Meanwhile, a worried father Ramji, looks on.

5 Quotes By Dr. Babasaheb Ambedkar On The Indian Constitution To Revisit This…

In the upcoming episode, Bhim becomes a lawyer for his brother Bala, and fights his case against Ramji, while his mother acts as a judge. Will Bhim be able to get justice for Bala? To find out, keep watching Ek Mahanayak Dr. B. R. Ambedkar on Zee5.