Exclusive: Aayudh Bhanushali Reveals What He Learnt From Playing The Role Of B.R. Ambedkar

After playing the role of a young Ambedkar in 'Ek Mahanayak: Dr B R Ambedkar', Aayudh reveals what the show taught him and how he manages his studies. 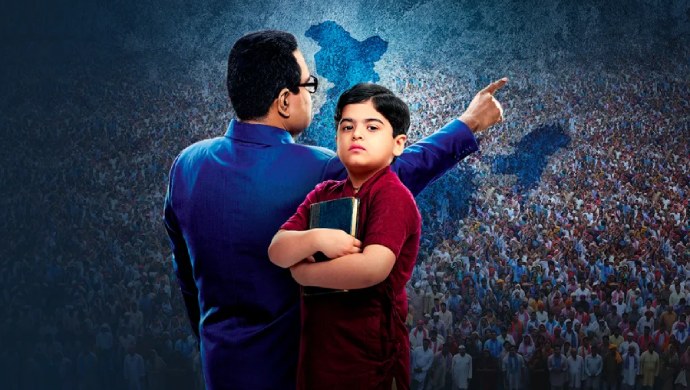 Aayudh Bhanushali has been winning hearts of audiences with his portrayal of Babasaheb Ambedkar as a child on the popular And TV show ‘Ek Mahanayak: Dr. B R Ambedkar‘. This show is a biographical drama and touches on the sensitive subject of caste discrimination among other social evils. Aayudh has successfully managed to pull off the role of an inquisitive, curious and determined Ambedkar as a child. We spoke to him to find out about his experience on the show and learnings of portraying the role of Babasaheb Ambedkar.

Watch a promo of his performance here.

1. What have you learnt about Ambedkar in school?

I’m still in the first standard. Right now Babasaheb is not a part of our syllabus.

2. How do you manage school and shooting?

Whatever they teach in school, my mother gets it on WhatsApp. So when I come back from the shoot, she teaches me everything. I get time to study when I am going for the shoot in the cab and while returning. Even when there’s a set-up change, I finish some of my homework.

3. Do your school friends watch your show?

Yes, all of my friends watch the show at their homes. They even tell their family members and relatives to do the same.

Of course, I like them because they do a lot of mischief with me during the shoot. Whenever we have a break on set, they play with me but then when we have to give a shot, they all become serious.

We play Antakshari and Dumb Charades on the set. We also play educational games on the phone so that I can study as well.

5. What did you learn from playing the role of Babasaheb Ambedkar?

I learnt that Babasaheb has struggled a lot in his childhood. He was always interested in studying and learning new things. He was an obedient child who listened to his parents.

That last sentence may or may not have been prompted by his mother. What we do know is that Aayudh Bhanushali is truly inculcating all the qualities of Dr. Ambedkar in his real life with the way he pays attention to his education. Watch the impactful episodes of his show ‘Ek Mahanayak: Dr B R Ambedkar‘ anytime on ZEE5.

Watch 'Hutatma' the story of Maharashtra being formed as a state with Bombay as it's capital, on ZEE5

#QueerAzaadiMumbai: 3 ZEE5 Originals That Prove #LoveIsLove (And With Pride)