In this candid chat, Ashutosh Phatak talks about composing songs for REJCTX 2, being the 'grandfather' of Indian hip-hop and his life under lockdown. 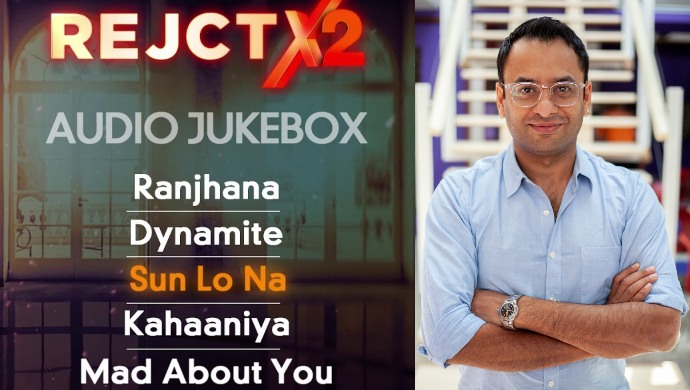 Ashutosh Phatak co-composed the music for the second season of REJCTX. But chances are, you are a fan of Ashutosh’s work without even knowing it. He was one of the composers of India’s first popular rap song ‘Mumbhai’ with Jaaved Jaffrey, and composed around 4000 ad jingles. He was also the composer of the 2007 film, Mere Pehla Pehla Pyaar (MP3), which became a hit because of it’s music. He also was one of the co-founders of two of the best live music destinations with blueFROG, and The Quarter. His students from ‘True School Of Music’, continue to shape the music scene and most recently have given us the REJCTX Season 2 playlist.

Listen to the entire album here.

First off I loved the songs in REJCTX 2, but I can’t seem to find the artists. Since I heard all of them are from your school can you put some names to those voices?

The names are available in the YouTube link so you can find it there. But yeah male parts were sung by Rajat Sharma, who sang Sun Lo Na, and other songs. The female voice is Ruhika Rao, who sang the Maddy song too. In Dynamite there’s a third singer, Sonakshi Singh. So these are the three voices.

How did you choose a particular singer or artist for a song?

The whole idea of this was to give the young talent from our school a chance to get on this. We actually tried out many different voices in different versions. The ones you hear now are the ones that stuck with us. The versatility of these guys is what impressed me. Like Rajat for example, he went into a complete folk zone for Ranjhana, and in Sun Lo Na, it was more in the Arijit zone, if you can call it that. That’s what I tell all my students you know, to be versatile to survive in this industry.

So is there any plan to release the rejected versions? since the show is called REJCTX?

(Laughs) You know that might be a good idea. Like since we do have a lot of different versions I should ask Goldie (Behl, Director) about it. For Sun Lo Na, there was like a bossa nova track, which Anisha Victor liked more than the released version. Dynamite, had five different versions. I feel the final versions reflect the story in the best way, but there are some beautiful versions that didn’t make the cut.

Did you listen to the music from the first season composed by Sneha Khanwalkar before starting for the new season?

Yes and no. I did listen to the songs from the earlier season, but I didn’t want to replicate anything from there. So if you ask me what I got from it I wouldn’t be able to pinpoint one thing. However, I wanted to know the kind of energy expected from this series because the show has a young cast and it is full of energy.

REJCTX is a story of a hip-hop group in school. Even Gully Boy was about the whole Indian rap movement. Do you ever look back and think your composition ‘MumBhai’ was the first real hip-hop track in India?

In fact, I think now looking back on it, maybe we were the grandfathers of real hip-hop in India. Also we might be making plans to revive that song in some form but I can’t say anything more about it right now.

How far do you think hip-hop has come since then?

Well you know the hip-hop scene has come in spurts. When Jaaved, me and Dhruv did it, it was the old school hip-hop. Then it faded away and slowly the revival began. Gully Boy brought the whole thing back you know. And I am really glad Ankur, and that film brought the music back. But the thing with us in India, is that we also get attracted to the new fads, we don’t really settle down into any music. I do feel hip-hop is no longer a fad now. My next hip-hop project will probably include more old school stuff.

What was it like collaborating with Ankur Tewari? How did you share work or work out creative differences?

No, no we are always in sync, on the same page whatever you would call it. I compose really fast and he composes quickly too. So we would just sit in the studio, and start jamming, and we would compose 3-4 songs in one session. The reason I like to work fast is that you don’t lose the initial momentum of your idea. It was really quick and easy actually. That’s why we had so many different versions.

If you had to choose the best song from this album which would it be?

I’ll tell you which song I liked, but first I noticed something different for the songs. Like my mother heard the songs and said she liked Sun Lo Na, because it’s like a classic romantic song, and someone else said Ranjhana. So I feel like certain type of people will like certain songs. Personally, I liked the simplicity and quirkiness of the Maddy song.

You won’t believe, that’s exactly what Ankur said too…

Yes, like I said, we are completely in sync. (Laughs)

I saw you episodes of Pursuits by Skoda, Do you ever think of opening blueFROG again?

Now in the pandemic? Maybe not. But honestly I wanted to start a live music venue and I did that with blueFROG. Then I wanted to start a smaller venue for jazz nights and I started the Quarter. Now, the profitability of these ventures is very low, so it becomes a whole other thing to keep them running. What I am now doing is, getting into programming shows. I’m trying to get in touch with places where we can set up live shows.

Another thing I am excited about is seeing where live shows go from here, after the pandemic. Because all the LED screens and the distractions will go away. Everyone will have the most cost-effective concerts, and the artists will have to hold audiences with their craft. It will be an interesting time for live music. If I think of a new bueFROG I will have to think of it as a live venue but also with online shows. Let’s see where it goes.

For someone who has been such a huge changemaker in the music industry, do you feel you get enough credit being behind the scenes?

One thing I am not good at is tooting my own horn. I am not good at social media, or talking alot about my work. I don’t feel the need to keep doing that. I get inspired by real work happening on the ground level. Like people might not know, I am the owner of True School of Music, but the change it is creating in the industry, is satisfying for me. But you are more than welcome to tell people about my work!

From a music composer, entrepreneur to a teacher. What’s next for you?

Next for me is to take the education thing to another level. A field I feel can see real change is edutainment. Especially now, when people are contemplating their own lives, and want to learn new things. So I don’t want to give them a gig, but if I can educate them or give them more value. I want to try and do that with musicians and artists, to build artist centric online courses. Because this will give them a different income stream, apart from live gigs.

Have you always been more about collective effort and ‘let us do this together’?

I mean it has always been more interesting to be outside myself. I enjoy personal achievements but then I think so what? I think you need silent stewarts, like me, you could say, who stay behind the scenes, and guide the movement. In some sense people who are morally aligned to where you need to go.

Lastly since you are used to producing music quickly, how are you dealing with the slowdown?

In this lockdown you mean? I haven’t slowed down at all. I have been doing a crazy amount of work. Firstly, I was doing The REJCTX background music for the 10 episodes. I am working on two other series and some other songs too. I have been living in Pune, and set up two studios at home. I get more work done, because there’s no distractions at all now.

What was your most productive work during the lockdown? Let us know in the comments below. Watch the series REJCTX 2, streaming on ZEE5 from May 14, 2020.