"Getting a boyfriend home when the father is already in the house is a story for me, but asking for a condom from him makes it a film," says Shoneel. 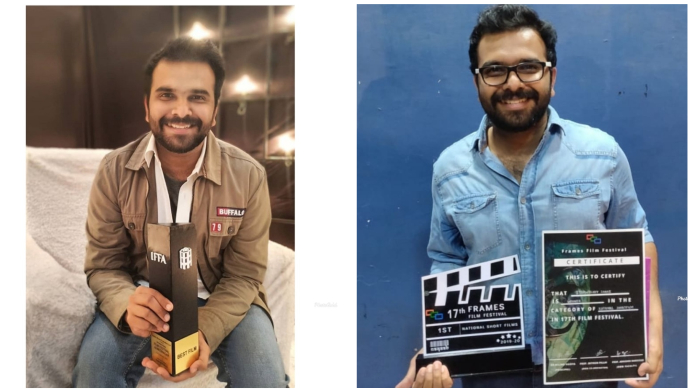 Strawberry Shake is a Marathi short film made by Shoneel Yallattikar, streaming only on Zee5. It’s a beautiful story about a conversation between a father and daughter. It’s a modern-day bible of communication with your parents and relatives and explores the deep emotion between them with great panache.

Watch the trailer for the movie here:

In this exclusive interview, Shoneel talks about the origin of the idea and the difficulties he faced while making the movie.

1. How are you reacting to all the appreciation and love coming to Strawberry Shake?

As of now, I am home and being a good citizen, There was a lot of love showered yesterday that funnily got me thinking that this may be only one-day stardom and after that, I will just be who I am before this film released. But the film is doing well and the response has been good.

2. How did Strawberry Shake as an idea originate?

So, as a writer-director, one knows the process that it might just hit you like a “Eureka” moment. Okay, there can be a film made on this subject or there must be a seed idea, somewhere in your mind that starts shaping up, accordingly. This thought also came to me because I wanted to do something about sex education in India. I come from a conservative house but as there were wedding conversations my parents started opening up more. They started becoming more liberal and respectful about my privacy. This hit me hard and made me write this film. Also, it’s a heavy subject so you can’t just ask someone to digest it. So the treatment had to be more nuanced and subtle. Also, getting a boyfriend home when the father is already in the house is a story for me, but asking for a condom from him makes it a film.

3. Why the title Strawberry Shake?

As a person, I am someone who pays a lot of attention to the title, I love seeing through titles. Any title should have basic aspects like easy to remember and relatable to all. Secondly, the condom was of strawberry flavor. It could play on any title such as friendship or father-daughter but that wouldn’t stand out. Hence, Strawberry Shake, as it raises a few eyebrows and makes you curious. It also ends on the same resolution.

4. How was it working with the cast?

I was nervous initially. Hruta and I go back a long way, there was an acting class where she would learn and I was teaching direction to others. She caught my eye and I had it in mind to work with her. But within a year or two, she had already become a television star. But when she read the script, she was on board immediately. Hruta is just magic on screen. Sumeet Raghvan I met on a feature film where he was the lead and I was an assistant director. I got hold of his number and just took my chance and texted him. He heard the narration and gave me the dates before I even had a producer. His professionalism is outstanding and it was amazing working with him.

5. Did you ever have the “Strawberry Shake” conversation with your parents?

Not exactly, but I remember in the seventh standard, I came across the term “sexual” and I just came home and asked my mom, “What is sexual?” I did not know that we don’t discuss these things. Although my mom did explain to me to an extent you can explain to a 13-year-old. After that, I did not feel taboo about that anymore. I could always confide in my mother about my relationships. Even though there is an orthodox set-up, they gave me leeway and freedom which makes me a product of their upbringing inspiring me to write this film.

6. What is the most memorable experience of shooting this film?

One aspect of shooting is memorable in a bad and good way both because I had a producer before. We shot this film last year in April and the first slab of payment was supposed to come a few days before the shoot, but what happened was, I only received half of what was promised and then the producer never sent any money. One day before the shoot, I called my technical team and came up with different propositions. I asked them if we could go on the schedule and after a platform has brought the film, I will pay the technical staff. What touched me was how everyone showed faith in me and said yes to the film. I am happy to say that the moment the platform bought the film and the money reflected in my account, everyone was paid in the next hour and that was truly memorable.

7. What would you like to say to our young viewers?

I would like to say that it’s not a green signal for going and having sex. It is more focused on a conversation and creating an honest atmosphere with your parents. The thing is everyone in this generation is having sex, which is perfectly normal, but, it’s essential to be responsible and let your parents know so, they can at least be there for you. Especially young girls fear that the guy is not right or after the breakup, he would not maintain decorum but, in these situations, if parents are aware, a guy would never dare to bad mouth a girl. The only vulnerability can be taken advantage of. Have a conversation.

Svah! So Be It: This 12-Minute Short Film Millennial Take On Modern-Day Weddings!