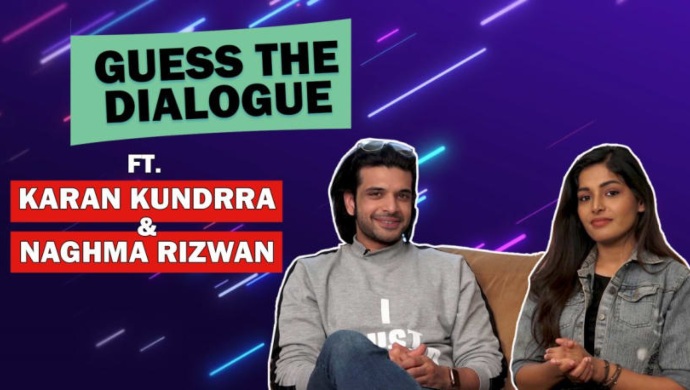 Premiered on 29 February 2020, ZEE5 Original romantic tragedy series It Happened In Calcutta stars debutant Naghma Rizwan as Kusum Ganguly, Karan Kundrra as Ronobir Chatterjee and Harman Singha as Ratan Bagchi, in the lead roles. Set in the ’60s and ’70s, the yesteryear love saga revolves around aspiring doctors Ronobir and Kusum who meet at their medical college. During its promotions, two actors from the star-cast played a fun game with ZEE5. Karan and Naghma try to guess iconic dialogues of movies from the 1970s. Let’s see who got them all right!

While Karan Kundrra is chilling on the couch, Naghma Rizwan is super enthusiastic to get the game started. The host has cue cards on which are written unforgettable dialogues of evergreen movies and actors! He shoots the first dialogue and Karan Kundrra immediately scoffs at how easy the answer is! Not even letting the dialogue finish, the actor guesses it to be from Rajesh Khanna’s film Anand (1970). Naghma Rizwan sulks on the side saying, “I wouldn’t know anyway!”

Then comes the most famous dialogue, “Pushpa, I hate tears!” Naghma jumps at this and doesn’t let Karan speak by covering his mouth. It blows on her when she says the actor’s name but doesn’t know the film. Karan mimics her to make fun of her in good humour. The host gives Naghma the easiest clue and she guesses Amar Prem (1971) correctly! Going on to the third dialogue, it gets difficult. Naghma confuses Yaadon Ki Baarat (1973) with Sholay (1975) for the dialogue, “Kutte, kamine, main tera khoon pee jaunga”.

Naghma shouts all the wrong guesses – Kal Ho Na Ho, Shah Rukh Khan and Kabhi Khushi Kabhi Gham for Rishi Kapoor’s recurring line from the film Bobby (1973). The host exclaims and claps for Karan’s Bollywood knowledge when he guesses it right after an intelligent pause! Karan won the game hands down but he had to get the last dialogue correct which was Amitabh Bachchan’s epic dialogue from Deewar (1975)! Naghma became a laughing stock when she yelled Shah Rukh Khan’s name. In her defence, she admits to not having seen these movies!

Let us know in the comments section below, how many movie names did you guess right! Don’t forget to show some love to Karan and Naghma by watching It Happened In Calcutta streaming exclusively on ZEE5 Originals!

You can binge-watch your favourite movies from the ’70s like Mera Naam Joker, starring Raj Kapoor, on ZEE5 now!