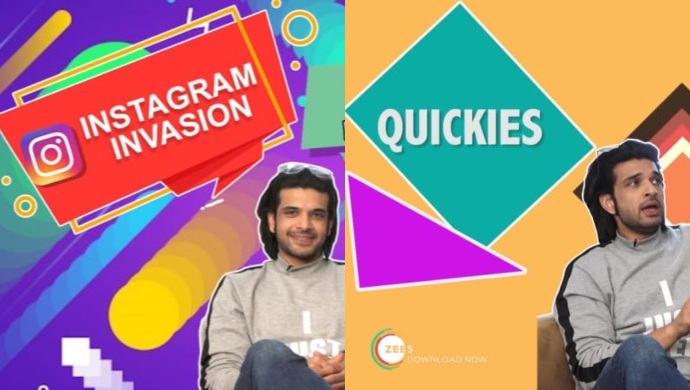 Did you know that Naghma Rizwan was called to audition for Kusum Ganguly because director Ken Ghosh saw her candid post on Instagram? Yes, that’s how her journey on ZEE5 Original series It Happened In Calcutta started! While debutante Naghma portrays Kusum, her love interest Ronobir Chatterjee is essayed by Karan Kundrra. During promotions, host Dheeraj Juneja caught up with the lead stars to have some exclusive fun! Have a look at what happens behind-the-scenes in the ‘Instagram Invasion’ and ‘Quickie’ question-answer games:

Watch the video of this fun segment here:

Dheeraj Juneja begins by asking the actors whose Instagram account they stalk the most. At the drop of a hat, Karan’s answer is Rolls-Royce fan club, while Naghma blushes when she says, “My crush” first and then goes on with travel, art and movie accounts. On being asked if they want to hack anyone’s account, Karan voices his cringe moments, wanting to hack celebrity accounts and shut them down!

Karan is reminded of his driver Parvez who comments on his posts in Mumbai slang words like “angaar“ (fire), upon being asked the last Instagram comment he remembers! Then, it is revealed that Karan would like to handle Sara Ali Khan’s fan page because he is impressed by her intelligence and the way she conducts herself in public. Karan also said that has immense respect for the late Sushma Swaraj ji in his answer to the next question. In the end, Dheeraj clicked a picture with the actors and uploaded it to his Instagram story!

Watch the video of this Q&A segment here:

It begins with Dheeraj’s witty words, “It Happened In Calcutta, but this is happening in Mumbai at the ZEE5 office!” As the name suggests, in this round, Karan and Naghma are asked quick questions, which they have to answer by naming or pointing at each other. The actors banter when asked who clicks the most selfies. Karan recalls that Naghma sends pictures of herself when the former asks for photos of her cat! Karan says to Naghma, “Who has even asked for your pictures?”

To the question of who doesn’t answer calls/text messages, Karan chuckles that he was born in DND (Do Not Disturb) mode. Naghma Rizwan can’t stop smiling when Karan shares an instance when he was on a diet and she was tempting him with food at 3 a.m. Naghma is called ‘not of this world’ due to her disinterest in the latest gossip which Karan strangely enjoys. When asked who is the most romantic, Karan answers that Naghma is hard-core, to which she adds, “I’m the most romantic person alive!”

For more such fun and games, hop on to ZEE5 Originals and watch It Happened In Calcutta clips streaming exclusively for you!