Neha Joshi, who plays Ambedkar's mother, tells us what motivates her to do the show and introduces the new entry Sapna Devalkar seen as Gangubai. 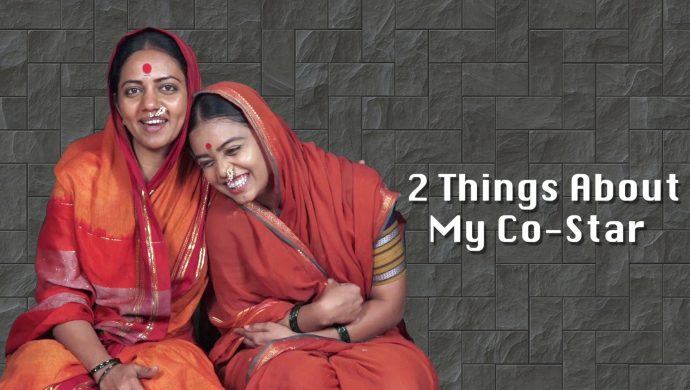 Neha Joshi is a popular Marathi actress seen in hit films like Poster Boyz and Zenda. Lately, she took up the role of Bhimabai, Ambedkar’s mother, in the AndTV show ‘Ek Mahanayak – Dr. B R Ambedkar‘ which is one of the most popular shows on the channel already. In these behind the scene clips, she is seen having a fun chat with Sapna Devalkar who recently joined the show as Gangubai, Bhimabai’s daughter.

Neha Joshi reveals that Sapna Devalkar is a great cook and brings a lot of delicious food at the shoot. She also confides that Sapna is shy and doesn’t share her food with everyone. Neha mentions that she figured out a fun way to get Sapna to share her lunch. Sapna who is new to the show and acting, in general, says that she has learnt a lot from Neha on sets and in life.

Neha and Sapna have formed a strong bond in a short while and it is quite evident. Sapna reveals that Neha is not only a mother on the show but also a motherly figure in real life. She recounts a specific incident where Neha showed concern for her and made her feel comfortable on set.

Neha reveals how the people on set have become part of her family within two months. She says that it can take almost 17 hours to shoot one episode sometimes. She admits that shooting schedules can get tiring and acknowledges that it must be even more exhausting for the people in lighting and camera. Neha adds that despite the effort it takes, she goes home satisfied with her work and always looks forward to shooting good and important scenes the next day.

To watch these great and important scenes that Neha is referring to watch the latest episodes of ‘Ek Mahanayak: Dr. B R Ambedkar‘ which tackles the subjects of caste discrimination through the life of Babasaheb Ambedkar. Watch the story of the revolutionary Chaphekar Brothers in the ZEE5 Original web series ‘Codename Gondya‘