EXCLUSIVE! Paras Kalnawat Aka Faraz Of Ishq Aaj Kal: I Am Taken, She’s EXACTLY Like Me 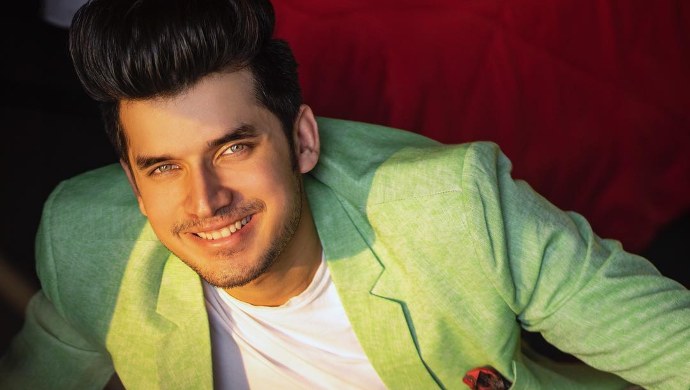 Paras Kalnawat has the looks to kill and a powerhouse of talent to keep you entertained. The latest wonder boy on the television block recently garnered praise for his portrayal of Faraz Sheikh in ZEE5 Original romantic-thriller web series Ishq Aaj Kal. Faraz, a man with a mission as Paras calls him, is one of the characters alongside Angad Hasija, Ankitta Sharma, Roshmi Banik and Kavita Ghai’s role in the digital drama. In an exclusive conversation, the actor opens up about playing a character with grey shades, bonding with his co-stars and breaks a million hearts with just three words: “I am taken!”

Q. How was the experience of shooting for the web medium?

The experience was completely different from TV. Things went exactly the same way I had thought they would. It was amazing working with ZEE5.

Ishq Aaj Kal is not a regular web series. It’s completely different because there is love, drama, and thrill. When I got to know about the story, I was very excited to play Faraz Sheikh. Because Faraz is a character that has various shades – there is romance, revenge and other things as well.

Q. You have earlier said that you’d love to play negative roles. Is that why you opted to essay Faraz?

Faraz is not someone who is negative. He is a man with a mission. He is here to take revenge and prove that his dad was not wrong. He can do anything, whatever it takes, to complete his mission. I’d love to play a negative role. Because in my first show, my character showed grey shades and people loved it. So that kind of revealed to me that I can play it well.

Q. Tell us about your stay in Manali for the shoot.

Manali, the experience was completely different from Mumbai. We had fun on the sets, all of us have become like a family. We’d wait for pack-up, however, we couldn’t explore Manali because we were shooting all the time.

Q. What is your bond like with your co-stars? We hear you suffered a nose injury because of Roshmi?

Me, Roshmi, Ankitta and Angad have become like a gang. We share a lot of things. Roshmi kuch bhi bole toh hasi aati he hai. I recently injured my nose because of her. I was pulling a prank and she was trying to do something with the mirror and it hit me, unintentionally. So my nose started bleeding. Yeah, that was that. Wo din bhar daat khaati rehti hai sabse. She is someone jo kuch bole toh double meaning nikalta he hai. She was told that she has a sugar daddy in the series. She goes and asks that person, oh aap mere dad play kar rahe ho? Then there was one time when the director told her to touch someone’s feet, and she did it without realizing that it was a prank. She is very masoom.

Ankitta is a very sweet girl, I know her for one and a half year. We did quite a few mock shoots together. Twice it happened that we were supposed to work together, but it didn’t happen. We gel up, our lifestyle and mentality match a lot. She is an old-school romantic like me. I get along with 99% of people on the sets. There are just one or two people who I don’t talk much to. And the people who I don’t gel up with, all four of us don’t get along with them. Angad is so humble and down-to-earth, we all think he is the most of simple one of us all. Everybody is so genuine.

Q. Since you mentioned you are an old-school romantic, can we ask if you are single or taken?

I believe that everything is so fake in today’s generation. Everything is made up. I believe love is where two individuals should trust each other completely. I am an old-school guy who believes that kind of love is rare to find today. I am taken, but it’s a secret who the person is. She is not from the industry. She is exactly like me, an old-school romantic.

Q. Between you and others, who takes the longest to get ready?

Ankitta ka jo getup hai, that takes a lot of time to get ready. We don’t take long because of our hair or anything, she is lying. Main toh bahot jaldi set kar leta hu. Right now also I am waiting in the vanity, mera shot lag chuka hai but I am waiting for Ankitta.

Q. Are you similar to Faraz in any way?

I am a Scorpio, to be very honest, there are times I think a lot about what has happened. I don’t take revenge like Faraz, but I keep things in my head. So there are similarities between Faraz and me. We both are men with a mission, and even I will everything it takes to fulfil my mission of becoming a successful actor.

The TV has a lot of drama. Most youths watch the web now. So they won’t entertain overdose of drama. I would love to do more of the real stuff, which is why I prefer web over TV shows now.

Q. You have impeccably groomed hair, do you follow a particular regime?

In the beginning, I kept my hair short, then they kept growing and got caught in continuity. By the time we were wrapping up, it became a weird hairstyle. Whenever I’d ask they’d tell me that now I am caught in continuity. So in some episodes, you’ll see my hair is short whereas its longer in others.

Q. Your favourite scene from season one of Ishq Aaj Kal is?

My favourite scene is the transition from positive to a grey side.

Q. What can we expect from season two?

Season 2 will show how the characters fulfill their motive. How do they hold their places and tackle the barriers, they still move closer to their plan is what comprises of Ishq Aaj Kal season 2. Also, it will all be at a pace because we have more seasons coming up!

5 Romantic Destinations In India You Must Visit This Monsoon