EXCLUSIVE: REJCTX Is Nothing Like Student Of The Year, Says Anisha Victor

Talking about a scene from the ZEE5 Original web series, Anisha reveals how she panicked and Kubbra comforted her, in an exclusive interview. 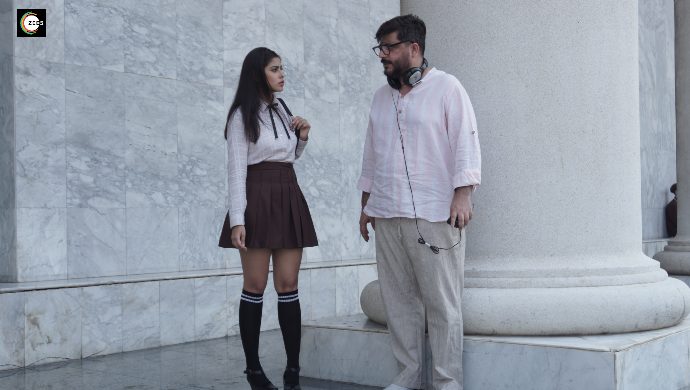 Goldie Behl’s ambitious project REJCTX is all about millennial life. The ZEE5 Original web series revolves around a bunch of Indian students in a foreign school and the struggles they face during their tenure. Starring internet bigwigs Kubbra Sait and Sumeet Vyas, the digital drama is a mystery musical thriller, also featuring Ahmed Masi Wali, Anisha Victor, Ridhi Khakhar amongst others. Since the story is set in high-school, comparisons with previous projects in the same space have been made. However, Anisha, in an exclusive interview asserts that REJCTX is nothing like other high-school drama and talks about issues that are very much real and relevant today.

Read a few excerpts from the interview here:

Q. Tell us about your journey up to REJCTX.

I started off with ads, I have done about 20 television commercials for various brands. I did a bilingual feature film, which released on November 2017 and did very well in the South. I have also done an international film Line of Descent, hopefully, it releases this year. I have done two web series too, What’s Your Status and Mr. Das. Then REJCTX happened, in March they asked me to audition for Kiara’s part as well. They liked my audition and then I was asked to audition for Parnomitra’s part as well. I got back home and in the evening I got a call saying I have been shortlisted and the next day they said I have gotten the part. I was one of the first characters to be locked. It’s been a roller-coaster ride since then. We started rehearsing for our cheerleading song.

Q. Your dialogue in the trailer ‘We don’t fit in,’ very much reflects the millennial state of mind.

The issues you will see in REJCTX are really relevant and real – depression, people who come from broken families, my character has been fat-shamed, so these issues are very much a reality in today’s times. Dealing with these issues and talking about them is very important. My character Kiara used to be overweight and her parents force her to lose weight to impress this guy Aarav. However, someone gets their hands on her old photographs and put it all across the school. There is this one-line I say in the web series, ‘Once a fat kid, always a fat kid.’ People don’t let it go.

Q. Could you elaborate on the music of REJCTX?

So when the series starts, Aarav is really frustrated. He just goes to the staffroom and vents it out through rap. Rap is such a strong genre, you may not like it, but you cannot ignore it. But REJCTX doesn’t have just rap, it’s like a mixed bag of musical content. There are several cute songs too. Parnomitra’s parents are a homosexual couple, but they are not allowed to be married in Singapore. She is really upset about it, so we all write a song for them and perform, it’s an ode to them.

How did Goldie Behl come up with the name and the idea for Rejctx? Read here.

Q. What are your expectations from REJCTX?

A lot of people are drawing comparisons, it looks like Student of the Year, blah blah blah, it is nothing like that. REJCTX is nothing like SOTY. I really hope it does well. I have a strong feeling it will. When you look at the trailer and the teasers, it shows a lot of effort has been put in. We have really put our heart and soul, we have worked back to back for 55-60 days. So when you put in so much hard work, something good is going to come out of it.

Q. How were Sumeet Vyas and Kubbra Sait to be around on the sets?

They are really nice people. Sumeet is so grounded, you just feel positive being around him. Kubbra is one ball of energy, it was really exciting to work with her. There was this one scene, where she had to slap me. I was panicking, and I was panicking really hard. She saw me panicking and she was like, ‘you know what I don’t have to slap you, we’ll just do a scuffle.’ But I didn’t believe her when she said that, I thought maybe she’d surprise me during the take. However, she didn’t and then I was like, ‘I love you Kubbra!’

Q. What about Goldie Behl?

He’s the youngest amongst all of us. It’s so much fun being around him. When we got back to Bombay, we had to go to Madh Island for a promotional shoot. All of us had this thing, we walked onto the sets and we were like, ‘Why is this set so dead? Ye kuch ho kyun nahi raha hai yaha pe. Koi ek dusre se baat kyun nahi kar raha hai?‘ I immediately texted him saying ‘you have spoilt us, you have ruined this for us. Now every time we walk into a set, it’s not going to be how it was in Bangkok.’ I really miss it so much!

Stay tuned for more updates and exclusive dope on REJCTX.

In the meantime, catch up or binge-watch episodes of your favourite TV shows on ZEE5.