Sai Deodhar Anand first entered the industry as a child artist in a 1993 Marathi movie - Lapandav. She will next be seen in Mogra Phulaalaa movie. 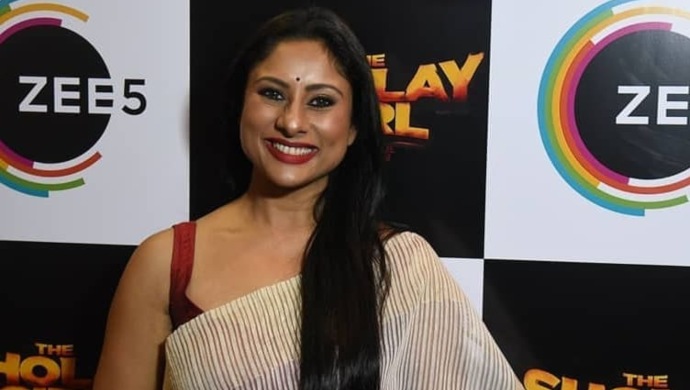 Actor-turned-filmmaker Sai Deodhar Anand first entered the industry as a child artist in a 1993 Marathi movie – Lapandav. The feature film marked the debut of her mother Shrabani Deodhar as a director and her father Debu Deodhar, a renowned cinematographer, was a part of it too. Thus, it is no surprise that Sai takes absolute pride in being the ‘child of this industry’ having born in the lap of parents from the world of cinema. Best remembered for her roles in Saara Akaash and Ek Ladki Anjaani Si, Sai recently debuted as a director with ZEE5 original short film D.A.T.E. It was her frustration with the roles she was being offered that led her in the direction of filmmaking, she revealed in an exclusive interview.

Sai has also written D.A.T.E. and co-produced it along with her husband Shakti Anand and mother Shrabani under their banner Purple Morning Movies. The unhappiness resulting out of the roles being offered on the small screen led her to pen the script. “I was extremely frustrated with doing TV. I was playing somebody twice my age. After a point, I started questioning what is the reason why I became an actor and how long am I going to do this? To give myself a break, to do something apart from acting, if I have to keep my sanity, I decided to write the script.”

She further added, “I passed it on to my mother, she heard it and she liked it. She told me, ‘I think you should do this.’ We pooled in some money and we made D.A.T.E. At that point, we had no idea what the film was going to do and what was going to happen. We just made a film. And then we figured out there is a whole international market out there, there are film festivals that happen every year abroad. The entire process of DI, mixing, the premix, it was a huge learning experience.”

Sai also explained why not being satisfied on the acting front made her take up writing. “I was very unhappy with the work I was doing. I am somebody who carries their work. My work determines how I feel, what I do. If I am unhappy with my work, I am unhappy as a person. I am not somebody who can separate my work from personal life, that’s not how it works for me. My work defines me,” she reasoned.

Having said that, she is set to make her debut in the Marathi industry alongside Swapnil Joshi in Mogra Phulaalaa soon.