Tanvi Shinde talks about playing the role of a swimmer, Yesha, and she also shares how her co-stars pranked her while shooting for the series. 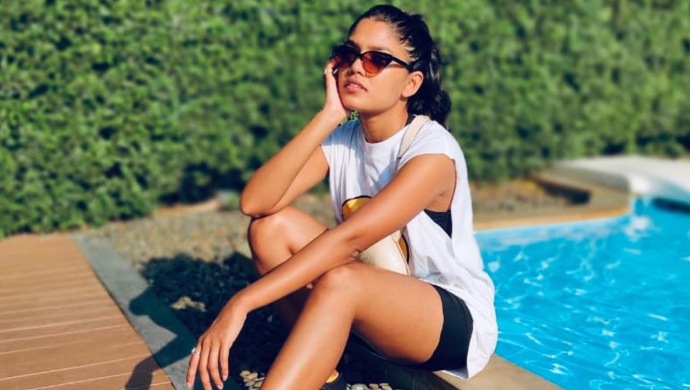 Tanvi Shinde played the role of Yesha in the second season of REJCTX. If you have watched the second season you will know how big a deal that is. After watching her role in the series we sat down for a chat with her about being the new entry on the show. She also tells us how she prepared to play the role of a champion swimmer while being hydrophobic i.e. scared of water.

Watch the trailer for the second season here.

This season is set to be hotter and more exciting. What can fans expect from your character?

There’s a lot that Yesha is coming from. She is trying to make her place in the group. Because in season one we saw how close they got as friends. They are you know the band of misfits and then I come with the craziness of my own. Everyone comes with their past and Yesha has a past of her own. She was pregnant as a teen before going to Jefferson World School. She is strong in the way she deals with it too.

Since she is a new kid, I’m sure anyone who has been a new student ever will relate to her character. I think even the audience will see how awkward or odd it is to be a new kid in school. She is a girly girl who likes make-up and all, but she is also sporty and a very good swimmer.

In the show, you seem to be swimming like a pro. Did you learn swimming for the role or did you already know it so well?

I have a very interesting story behind that. When I found out that I could audition for the role I told them that I knew swimming but I wasn’t very good at it. I am actually hydrophobic because when I was younger someone pushed me into a pool and I was drowning.

That’s how all Indian parents teach their kids swimming, by the way…

Haha yes, but I live in the States, and I learned swimming eventually but I am scared of water. When they showed me photos of the pool I was going to be swimming in, I was terrified. But then they liked me for the role and asked me if I was up for it. I said yes and then I had swimming lessons, that I took in Mumbai, in Juhu. The trainer noticed that I knew to swim, but I was scared of drowning, so he calmed me down about that. When I went on set, I practiced again, this time with Maddy (Ayush Khurana). That’s when I learned diving and when I first saw the footage of me swimming I was happy that it looked good.

Did you get over your hydrophobia eventually?

Yes, actually shooting for this series helped me get over my hydrophobia so that’s like an added benefit I guess.

How was your experience on set with actors who had all worked with each other before?

So I was the only new student. All the others had worked with each other. I had worked with Pooja and Anisha in ads before, but this was you know a month of living together and shooting together so I didn’t know what to expect. When I went there everyone was so nice to me. The moment I reached I remember Masi, Pooja, Ayush all stood outside the elevator to greet me. They took me around the hotel, told me how things worked around the sets of the series. On the sets also, everyone would do their own scenes but at lunch, we would all just have fun and try to pull pranks on each other.

Did they try to pull any pranks on you?

So I am scared of the dark and I sleep with some light on. One night we returned to our rooms late and Saadhika, who plays Sehmat was my roommate. She noticed that I always leave the light on and she didn’t say anything that night she only smiled and went to sleep. The next night she put off the lights dressed up as Monjolika from Bhool Bhoolaiya and scared me. I was screaming and everyone from the nearby rooms was wondering what is going on and everyone found out that I was afraid of the dark.

Was honestly terrified of the idea that I’ll have to share my space with a stranger for a month but my first ever roommate @saadhikasyal you surely have been a sweetheart and took care of me like a little sister, made so many memories I can’t put into words, just few more days left and wow I’m actually gonna miss you ♥️ #rejctx2 #roomates 📸: @one.portrait.please @goldiebehl @mutinous_me @rosemovies_ @rejctx.zee5

You are seen having a crush on Maddy on the show. Would you say you both would make the hottest couple in the series?

We are definitely the hottest new couple on the show. We’re bringing some fresh love to the screen. But if I have to say the hottest couple on the show then that is definitely Sehmat (Saadhika Syal) and Misha (Pooja Shetty) because that’s one of the rare queer couples on Indian screens. Their love is shown so natural and normal, it’s beautiful. I have friends from the queer community and I can’t wait for them to watch the show and see their reactions to Sehmat and Misha’s story.

Since the show is all about music. Which is your favourite song from season 2?

Ah! They are all good songs. I’m going to name my top 3 then. First is obviously the ‘Mad About You Maddy’ song. It’s the song I sing for Maddy (Ayush Khurana). The second is Ranjhana and the third is Sun Lo Na. They are all such catchy songs and teenagers will definitely love it.

In the ‘Mad About You, Maddy’ song, it’s one of the rare songs about a man specifically. Do you think it’s important for women to express their desires more openly?

Yes, I had that discussion with Goldie sir too. He likes to create situations from the songs and not just put a song in for no good reason. That’s the song where Yesha decides to express her love for Maddy. It shows that it doesn’t matter who makes the first move, it can be girls or guys. That doesn’t matter anymore, what really matters is if you love each other just express it.

What are the three qualities you have in common with Yesha?

That’s a difficult question actually. I think the first will be her confidence. Secondly, she is honest about her feelings. Thirdly, she is clear in her head. She knows what she wants and how she wants to get it.

With which co-star is your equation more or less like what we see in the series?

No one actually. Everyone becomes different people when they become their characters. Because we play such complex characters on screen, our equation is much better in real life. In fact, I remember the first day I seen Sehmat wearing the hijab and her whole costume. She was a completely different person there was no hint of Saadhika, my roommate. The same thing goes for all the characters actually.

What is your message for the fans?

I would say take some time off from your schedule because once you start watching it, I don’t think you can stop. And once you do watch it make sure you don’t spoil it for the others.

Watch their incredible performances in the newly released season of REJCTX with the first episode streaming for free.