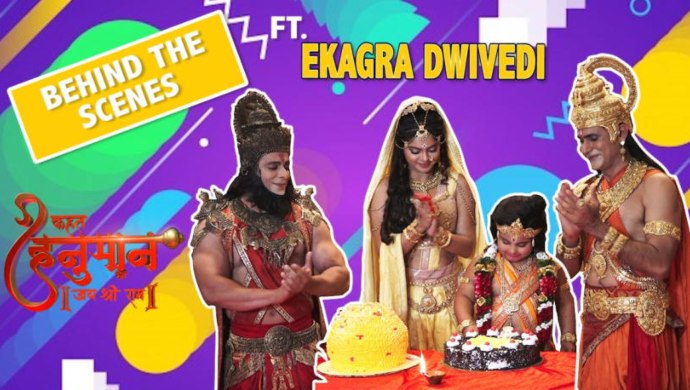 &TV show Kahat Hanuman Jai Shri Ram stars debutant child actor Ekagrah Dwivedi as Maruti aka Bal Hanuman. His mother Anjani’s role is essayed by Sneha Wagh, while Jiten Lalwani portrays his father Maharaj Kesari. Television mythos actor Nirbhay Wadhwa plays Mahabali Bali. All the actors from the star-cast, as well as the crew, were present on the set when Ekagrah celebrated his 5th birthday on 11 March 2020. To capture the fun, ZEE5 caught the stars behind-the-scenes and took a candid interview.

The first thing that Sneha Wagh and Jiten Lalwani do is kiss Ekagrah on his cheeks from both sides and wish him many happy returns of the day, to which the little boy replies, “Thank you!” He is then seen stuffing his face with a piece of the giant cake shaped like a laddoo, his favourite Indian sweet! An Instagram boomerang video of Sneha and Ekagrah is shown in which their mouths are wide open to gobble up the cake like monsters! There is another black forest cake that has “Ekagrah Dwivedi Maruti” written in icing. The birthday boy jumps and falls face down on his royal bed.

After cutting two cakes amid everyone’s birthday song and claps, Ekagrah expresses to the media that he wanted the small cake to be cut first because he wanted to save the best for the last. When he finally tasted the giant laddoo cake, it unexpectedly turned out to be chocolate flavoured! Jiten Lalwani and Sneha Wagh chuckled at Ekagrah’s innocence and surprise. Sneha gifted Ekagrah a big red box which she wanted him to open and tell her how he liked it. Both the on-screen parents address him as putra and Mr Ekagrah Dwivedi for fun!

Nirbhay Wadhwa also congratulates the young boy on his 5-year milestone. He praises him for playing his character exceptionally well at such a tender age. His life hasn’t even begun and he is already acting on TV! Nirbhay reveals that when Ekagrah is present, positive vibes envelop the set. Everyone becomes a kid with him and make all sorts of mischief. Some times, Ekagrah has a sudden urge to scratch himself or he feels hungry randomly! Sneha reveals that Ekagrah keeps running around and she calls her by his nickname ‘Duggu’. Jiten and Ekagrah end the interaction with a “Jai Shri Ram!”

Go ahead and show some love to Maruti in the comments section below. To catch these amazing actors in action, watch all the episodes of the devotional &TV show Kahat Hanuman Jai Shri Ram, streaming now on ZEE5!

Remembering 26/11: Photos And Facts About The Militants Behind 2008 Mumbai…