The jungle of Dhimkana Nagar has a merry band of animals who are outright entertainers. Enter Guddu ki basti with unlimited masti, only on ZEE5 KIDS 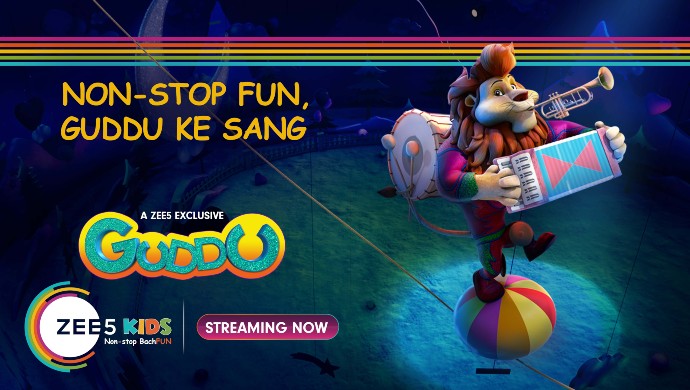 Do you miss circuses? Don’t worry! ZEE5 KIDS brings to you a unique and original series in the midst of a dense jungle. The second season of animated adventure series Guddu takes you into the unique world of Dhimkana Nagar, wherein reside the most entertaining animals. While India has nobly stopped using animals under the Prevention of Cruelty to Animals Act (1960), it doesn’t mean you can’t enjoy circuses. Guddu’s friends treat the audience by performing tricks. You’re welcome to have #NonStopBachFUN in Guddu ki basti with unlimited masti on May 8, 2020.

Guddu, the centre of attention on the show, is a vegetarian lion. His has a heart as large as his body, and he goes out of his way to help his friends, the residents of Dhimkana Vann, and even the police. He uses his investigation skills to help solve crimes in the city and does it while putting a smile on everyone’s faces. Well, have you ever seen a lion turn into a ringmaster himself? Now you will. Guddu majorly runs a city circus in Falana Nagar to spread happiness in their jungle as well as the adjacent areas. He even possesses mimicking and rapping skills.

The show also revolves a merry band of animals aka circus performers who accompany Guddu. A lazy Haryanvi rhinoceros named Veeru does fun tricks and shines with the hula-hoop around his giant belly. Chugli, Googly and Ugli are a triplet of monkeys who speak Bangla, the state language of West Bengali. They also act as Guddu’s informers during inspections of criminal cases and they take their job very seriously. Guddu’s relationship with his animal friends forms the crux of the show. He indulges in endless entertaining shenanigans.

The sole motive of Guddu in his masti ki basti is to entertain everybody. His team also includes a huge elephant named Ballu and a flamingo couple, Bunty and Bubli. The tall giraffe is Jiru and Honey aunty is the elderly bear. While Guddu is the hero of the jungle, there has to be a villain right? Not one, but two, the billionaire cat, Billori and Kallu the goon buffalo, have enmity with Guddu. But he leaves no stone unturned to defeat them and protect his friends. The story carries a message of the victory of morals and ethics over unethical behaviour.

Stay tuned to welcome #NonStopBachFUN and entertainment by Guddu season 2 on May 8, 2020, premiering only on ZEE5 KIDS.

Watch 'Simba - The King Lion', an animation series only on ZEE5

Kaali Season 2: A Recap Of Paoli Dam's Compelling Story So Far From Season 1