Food For Thought Short-Film Review: Shattering Gender Roles In The Quirkiest Way Ever!

In 11 minutes, this short film will give you a new perspective to break stereotypes with tongue-in-cheek humour! Watch it at ZEE5 Short Film Festival! 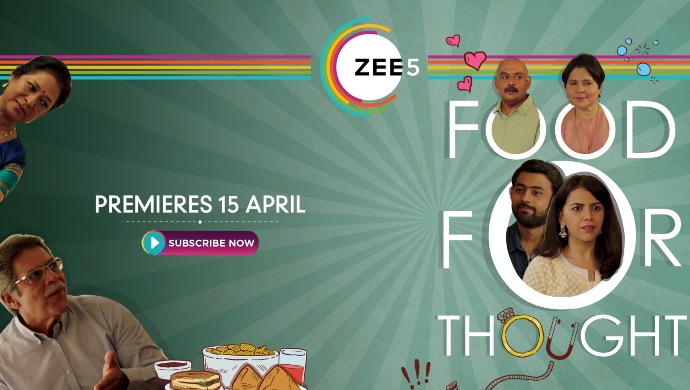 Quite different from the trend of breaking stereotypes and busting gender roles is the short film Food For Thought, premiering at the ZEE5 Short Film Festival. If we said that gone are the days when men demanded wives who “cook like their mothers” or grandmothers, we wouldn’t be completely right! Though we have come far in modernizing our mindset, we still have a long way to go. Director Tania Deohans seamlessly paves that way out for us through Simran and her family’s story, premiering on 15 April 2020!

Watch the quirky trailer of this short film here:

Television actress Rashi Mal steps into the shoes of a doctor to essay Simran, a young and successful cardiologist. Her parents are Zenobia and Atul, portrayed by the Dear Zindagi couple (Alia Bhatt’s parents) Aban Bharucha Deohans and Atul Kale. The film does a fantastic job at breaking the ice when Ravi arrives with his parents Seema and Sura, played by theatre thespian Alka Amin and veteran actor Micky Makhija. A clean mirror is shown by Zenobia to the crude face of conservative and orthodox Indian society, which is embodied in Seema!

While Ravi and his parents are meeting Simran as a marriage prospect, we see the commendable episode of a father standing up for his daughter. Atul takes pride in sharing that Simran studied medicine, achieved an M.D. degree (Doctor of Medicine), and now practices Cardiology at two renowned hospitals in the city as opposed to doing household chores, cooking, and serving the parents. Busting gender roles and hoisting the flag to equality, Zenobia adds that she and her husband, both work as college professors, and don’t find the time to cook food!

“Khana banana aata hai?” had become the eligibility criteria of a woman to qualify as a wife or daughter-in-law over the years. Simran’s tongue-in-cheek answer to it is an assurance that slowly but surely, India is changing for the better. Kudos to the Aban Bharucha (Zenobia), who is also the writer, for the crisp dialogues that shoulder the film. With a simple across-the-table conversation, she tackles the so-called awkwardness with utmost subtlety, which makes us wonder why we were trapped in this norm for so long.

Simran gets rejected as a prospective bride! But the tables turn when she is needed as a doctor at Seema’s house because Suraj has severe chest pain. We don’t know whether this scare enlightens Seema, but it definitely gives her food for thought! Stalwart Usha Nadkarni as Daadi is bound to make you smile, in the last scene wherein she adores Simran for attending to Suraj in the middle of the night after one phone call. But she drops a bomb by asking the same old question. And this time, Simran’s laugh does the job of an answer just enough!