Check out the pictures of your favourite celebs like Aasif Sheikh, Shilpa Shetty, Dia Mirza & others enjoying the festival in an eco-friendly way. 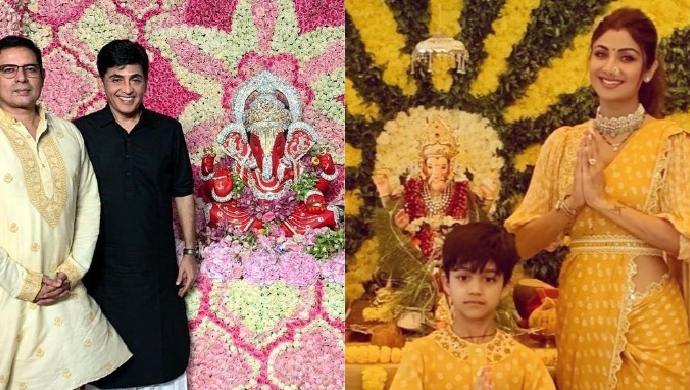 Lord Ganesha has finally arrived and we are on the third day of the celebration. Just like any other devotee our favourite stars also welcomed their Ganesha with utmost pomp and splendour. Looking at the natural calamities that are taking place in different states of the country, the celebs have taken a step forward to make the people aware of the environmental situation and spread awareness.

Watch the latest episode of Happu Ki Ultan Paltan below:

Angoori Bhabi aka Shubhangi shared a great message with her fans.

Bollywood actress Shilpa Shetty has been bringing Ganpati home from the last 9 years and this is her 10th year. The idol is made out of clay and not many of her fans know that it is the made by the same artists who make Lalbaug Cha Raja.

And …. My GANNU RAJA is back😇 Our 10th year ! The remover of obstacles and Lord of success.. May He bestow us all with His blessings this Ganesh Chaturthi. While I’m spiritual and celebrate all festivals, I’m also responsible towards our Mother Earth and we have continued our tradition of having an #ecofriendly Ganesha idol. Ganpati Bappa Morya 🙏 PS:Love and celebration is all of us #TRIPLING . Thankyou @punitbalanaofficial ♥️😍 #ganpatibappamorya #ganpati #blessings #gratitude #10years #family #tripling #yellow

Next on our list is Laddu Ke Bhaiya aka Manmohan Tiwari. Rohitash shares a selfie with his fan where he is seen taking blessing from Lord Ganesha. What interests us is the simplistic decoration which is environment-friendly.

Deepshikha aka Mahamaya aka Nilamkbari is a follower of Ganesha and believes in him. Due to the shooting schedule of the show Main Bhi Ardhangini, she had to stay away from her family but as they say, you can never separate the god from his devotee and the same happened here. Depshikha brought Ganesh idol on the sets of the show and the team celebrated this festival.

When you focus on being a blessing, God makes sure that you are always blessed in abundance. #ganpati Bappa moriya #❤️ #blessings #power #god #😇

Aaryan Prajapati aka Hrithik from Happu Ki Ultan Paltan is the naughtiest kid in the house. The child actor loves this festival and his excitement can be clearly seen by the caption saying “Aai Dev Bappa Ale” which means Ganesha has arrived.

The Grand Masti star Ritiesh Deshmukh shared a video of his making the Ganesha idol with mud clay. According to him, our children learn what we show them and this is the best way to teach them our culture.

Ganpati Bappa Morya! Traditionally we made clay idols and then immersed them in water to denote the Birth Cycle of Lord Ganesha/Ganpati who was created from Clay/Earth. Visarjan in its own way talks about nature's life cycle and while it should be one of the most Eco friendly events in India, it has become something else all together. Clay Handmade Idols have been replaced with Plaster of Paris and Plastic. Natural brown colour of clay is replaced by toxic paints to make idols shiny and sparkly. Size plays a big role on asserting importance or power of the celebration. “Mine is bigger than yours syndrome!” And then there are those awful unnatural plastic/thermocole decorations! All this is immersed in our seas/rivers/ponds/lakes without caring about the consequences. The consequences are dangerous, a complete contamination of our waters, soil and food chain. Surely Ganpati Bappa would never want to be responsible for harming that what he was born from? This Ganpati Visarjan, take this as an opportunity to understand the meaning of a birth cycle, go minimal, natural and sustainable 💚🙏🏻 #BeatPlasticPollution #SayNoToSingleUsePlastic #GreenGanesha #EcoCelebrations #EarthFriendlyFestivals #GanpatiBappaMorya @earthlingfirst @greenmomsindia @moefccgoi @narendramodi @unenvironment @undpinindia @treeganesha @bigfmindia @bigfmrani

Playing the role of Krishna in Paramavatar Shri Krishna, Ssudeep Sahir welcomed Ganesha but keeping the current situation in mind he created the decoration with flowers and eco-friendly things. Take a look at the video shared by the actor below.

With that being said, we wish you all a very Happy and Ganesh festival and make sure to avoid plastic.