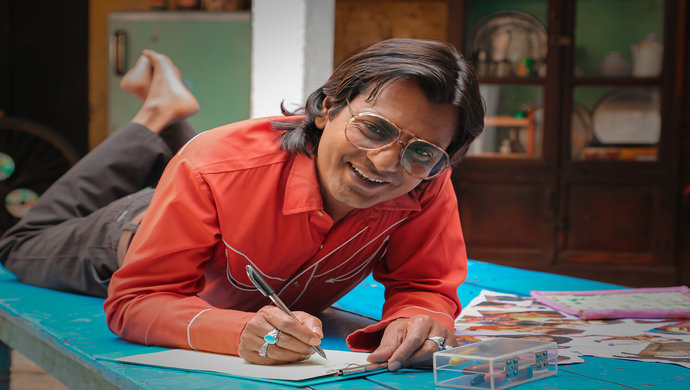 ZEE5, the largest creator of original content in India announces its next film ‘Ghoomketu’ set to release on 22nd May. An aspiring writer’s 101 retreat into the life of the protagonist, Ghoomketu is played by Nawazuddin Siddiqui. The movie is a comedy- drama from the viewpoint of an inexperienced writer struggling to make it big in the film industry in Mumbai. On his quest to come up with a great story, he is inspired by day to day mundane life activities. Will his ambition and determination exceed his talents? Or will a corrupt cop, who is on a mission to find Ghoomketu, put a brake on his 30-day escapade?

Directed by Pushpendra Nath Misra and produced by Phantom Films and Sony Pictures Networks (SPN), this film will be exclusively releasing on ZEE5.

The quirk and humour in the movie is exaggerated with dramatic linguistic annotations. The film is set in a wickedly playful backdrop and will be great for the entire family to watch together. The film also has ace director Anurag Kashyap as a cop and the talented Ila Arun as Ghoomketu’s Aunt, in lead roles along with Raghubir Yadav, Swanand Kirkire, Ragini Khanna and others. The film will also see special cameos from Amitabh Bachchan, Ranveer Singh, Sonakshi Sinha, Chitrangada Singh, Lauren Gottlieb and filmmaker Nikhil Advani.

Actor Nawazuddin Siddiqui shares, “Ghoomketu is a quirky, never-seen-before character and I thoroughly enjoyed playing him. Anurag, who is generally behind the camera, will be seen sharing screen space with us and it was a great experience to work with him as an actor. ‘Ghoomketu’ has a phenomenal storyline which will definitely entertain the audience. During this time of the lockdown, I am glad that a humorous film that the entire family can watch is being streamed on ZEE5.”

Actor Anurag Kashyap shares, “Every film is a labour of love and I saw the conviction in the director of Ghoomketu and hence decided to do something which is my least favourite thing to do, which is act. The film is funny and heartwarming.”

Film Director Pushpendra Nath Misra adds, “Wherever we go, we are never far away from our roots. Ghoomketu, as the name suggests, is a story of the ‘journey to the beginning’. This a film where the protagonist – a writer- draws inspiration from the idiosyncrasies of his own family members. This was a dream project with a stellar cast (sublime actors, all of them), and the freedom to tell the story in a non-stereotypical way. For all the writers, their observation begins at home. This film is a celebration of our family members – our ‘Bua’s and ‘Chacha’s and ‘Dadda’s – who we (Ghoomketu) always carry in our hearts, wherever we go. I am glad it will reach the huge family audiences of ZEE5.”

Aparna Acharekar, Programming Head, ZEE5 India expresses, “Ghoomketu’ is a film made for every member of the family and for them to relate to someone or maybe just sit back and have a good laugh. From a star-studded cast to its quirky characters, the film is a perfect treat for the audience. At ZEE5, we are proud to present Ghoomketu on Eid, our third Original film after Bamfaad and Ateet, to entertain viewers during the lockdown.”

Vivek Agrawal, Producer, Phantom Films says, “Ghoomketu” is one of those rare gems that will put a smile on your face while taking you through the struggle of a man who is out there trying his luck in Bollywood films. Bringing this story to life has been a roller-coaster ride, just like the protagonist’s journey in the film! It has been a pleasure working on ‘Ghoomketu’– a project that is relatable for many people, on so many levels and we are thrilled to have ZEE5 on board to release it.”

Meanwhile, get the whole list of romantic movies that you can binge-watch non-stop on ZEE5.

Here's How You Can Contribute To Animal Welfare, Inspired By 'The Enchanted Mountain'