Gold Awards 2020 awarded Nakuul Mehta and Jennifer Winget as Television Star of the Decade in the male and female category. Read more about it here! 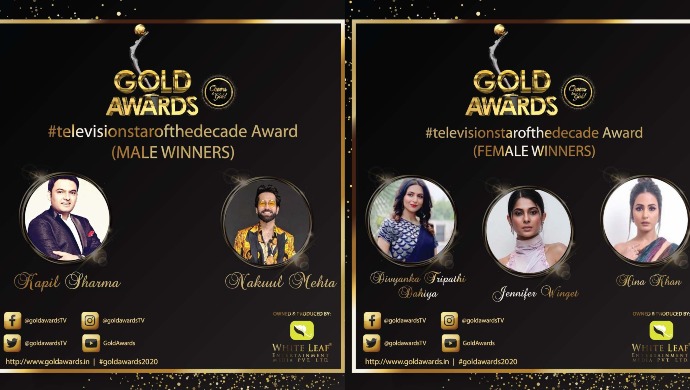 Gold Awards is an annual award show that honours the best performers in the Indian television industry. The awards are presented in various areas of excellence, such as popular programming, including music programmes, news, entertainment programmes, sports, travel, lifestyle and fashion; best television channel in a particular category including news, sports and entertainment; technical awards and popular awards. The event is managed by Vikaas Kalantari, founder of Gold Awards. They were first awarded in 2007.

Television Star of the Decade (Male):

In 2020, Nakuul Mehta won the award for Television Star of the Decade (Male). He shared the award with the comedy king of India Kapil Sharma. You have seen him as Sumer Singh Dhillon, in the ZEE5 Original romantic comedy series Never Kiss Your Best Friend, along with Tanie Brar, played by Anya Singh. The actor recently retweeted saying this award is his own ‘Oscar’!

Never Kiss Your Best Friend is a ZEE5 Original series starring Nakuul Mehta and Anya Singh. The story revolves around two best friends, Tanie and Sumer, who meet after 5 long years of separation. A heart-warming story that redefines the rules of friendship.

Television Star of the Decade (Female)

In the female category, Jennifer Winget, along with Divyanka Tripathi Dahiya and Hina Khan, won the Television star of the Decade Award. She has essayed the role of Major Monica Mehra on the ZEE5 Original crime thriller series Code M. Taking to Twitter as well, she retweeted Nakuul Mehta saying, “In top company at the top”!

In top company at the top! Thank you @GoldAwards and @VikasKalantri for this honour! https://t.co/SoqjHIqJje

White Leaf Entertainment Media Pvt. Ltd. and the founder of Gold Awards, Vikaas Kalantari announced and congratulations all the winners on Twitter. He also added that the awards will further proceed in October 2020.

Don’t forget to catch up all your favourite Zee TV shows on ZEE5 now!

Watch 'The Chargesheet: Innocent or Guilty?', a ZEE5 Original series