In tonight's episode, Guddan goes ahead with her wedding while waiting for AJ to show up and stop the wedding again. 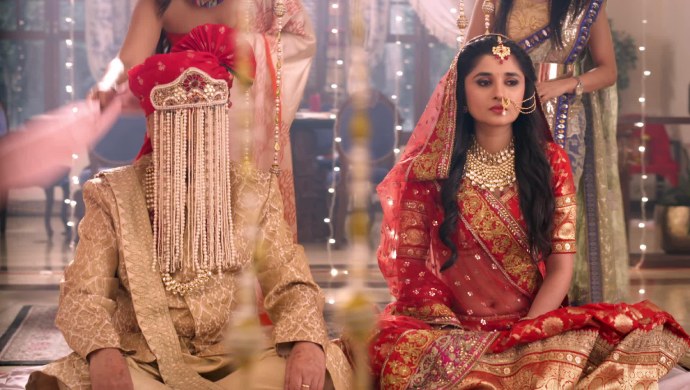 In the previous episode of Guddan Tumse Na Ho Payega, Guddan gives AJ her wedding invitation card. AJ is upset hearing that Guddan is getting married to someone else. AJ decides to stop the wedding and goes to Jindal Bhavan. He strangles Guddan’s future husband, Harish. Guddan stops him but tells Antara that AJ won’t let her marry anyone else. Antara knocks AJ out and puts him in the car to stop him from creating problems at the wedding.

In tonight’s episode, Durga shows up and asks Guddan why she is going ahead with the wedding. Guddan asks her to leave but tells herself that she pretended to go ahead with the wedding just to know if AJ still loves her. She tries to phone him up and tell him what the truth is. However AJ is passed out and doesn’t answer Guddan’s call.

Antara shows up and asks Guddan to go ahead with the wedding. She asks Harish to makes sure he marries Guddan since she paid him a lot of money. She puts a sehra over his face and takes him to the mandap where Guddan is waiting for him. Durga and Lakshmi tell Guddan to not get married, but Guddan says only AJ can stop her.

Before Guddan gets ready to do the saat phere, Durga pulls a log out of the fire and threatens to burn the mandap if Guddan doesn’t stop the wedding. Guddan tells Durga she had a chance to reveal Antara’s truth but she chose to support Antara instead. Guddan says doesn’t trust Durga at all and she won’t let anyone apart from AJ.

Once the Pandit announces that the wedding is complete, Antara decides to sign on the papers. She taunts Guddan for getting married to a family that didn’t believe her at any point. She insults AJ for being too easy too fool. Antara changes her mind to not sign the papers or leave AJ to make Guddan repent for getting into a fight with her.

Click to read all the incidents where AJ believed Antara instead of Guddan.

Antara tells Guddan’s new husband to take her away and leave the house. When Antara leaves Guddan’s groom gets up and removes his sehra. Guddan is surprised to see AJ as the groom next to her. How did AJ manage to replace Harish in the mandap? Stay tuned to find out.