Have some #NonStopBachFUN with Guddu and his friends as they discover a magical broom that thrashes the animals and watch how they tackle the broom. 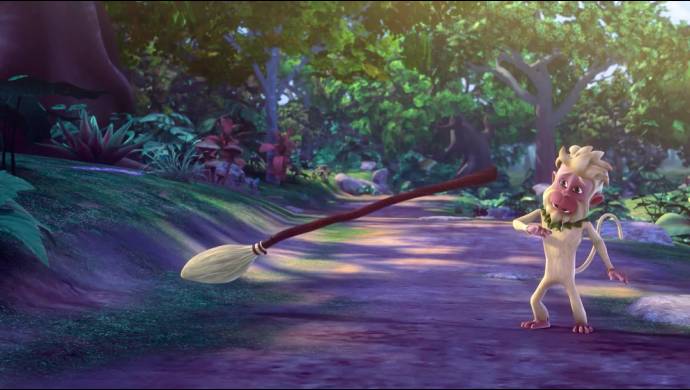 In the previous episode of Guddu, we saw how the marvelous lion saved the Vanmallika from vultures. We also saw how Guddu saved Dhimkana Nagar from King Chugleshwar’s tyranny. But someone was watching all of this silently, and waiting for a chance to pounce upon Guddu. In this episode, Ugli is seen strolling in the jungle, on a cool and breezy morning. Ugli stumbles upon a broom. and realises that the broom is magical!

Ugli tries to pick the broom and watches as it rises, then quickly jumps on it and tries to ride it. But the broom starts waving frantically, and Ugli is unable to maintain balance. The terrified monkey falls off the broom. But the broom is not done yet, it smashes Ugli in the back until he is sore. Ugli shouts for help and Guddu appears, but Ugli decides to hide it from him and wears leaves to cover himself. Guddu is suspicious but leaves the case. The same broom does this with Ballu and Veeru. Both of them get thrashed and hide the bruise with leaves. When Guddu asks them about it, they say it is a new fashion.

In the meantime, it is revealed that Bagad and Billa, Billor’s assistants are behind this broom. The broom is mechanical and can be controlled with a remote. Billori waits for Guddu to arrive, and beats him up until he runs away. Guddu is scared of the magical broom, but soon realises that it has done the same to everyone. He comes to the conclusion that Billori is behind it and decides to teach her a lesson!

Guddu asks Honey aunty to help him, and they make a plan to retrieve the mechanical broom. In the place of the controlled broom, they put the normal broom. When Jiru visits the place, Billori is unable to hit him with the broom and she comes out of the hiding, Guddu spots her. He breaks Billori’s mechanical broom, and the animals including Veeru, Ballu and Ugli beat Billori mausi up along with her assistants!

Are you enjoying the adventures of Guddu and his friends? Comment below!