Guddu and his friends save his Chachaji from a pack of wolves in one episode, while they fight off an evil fish in the other. 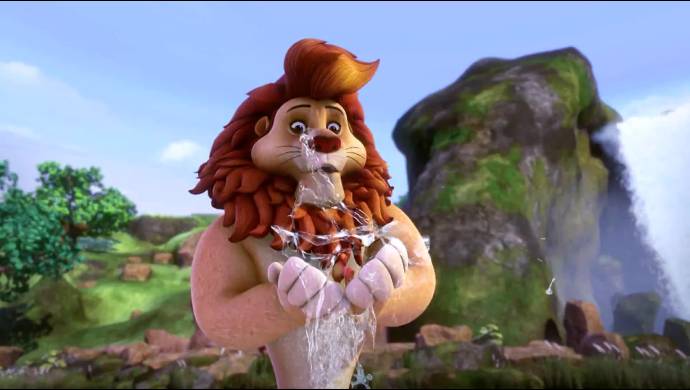 ZEE5’s Guddu is the Original animated series exclusively available on ZEE5 Kids so that parents and kids can indulge in some #NonStopBachFUN. The entertaining and fun series is a blockbuster in the animated shows section. In the show, Guddu and his animal friends face evil enemies, and help innocent animals. And the first few episodes were fabulous, as Guddu roared and emerged as a winner, when his enemy Billori, tried to create evil plans against him. The show has become even more interesting, as it moves ahead.

Guddu’s Chachaji (tortoise) arrives at Dhimkana Nagar, he tries to give some of his age-old advice about fitness, and work to Guddu, and his friends. All his friends are fond of Chachaji, and Guddu becomes insecure about his popularity, and he feels sad for the lack of attention. Due to this, he starts misbehaving with Chachaji.

When the latter realises that Guddu has started ignoring him, he decides to go back to his own home. But Guddu’s friends tell him that Chachaji has picked up a wrong path, and he is headed straight towards a pack of wolves! Guddu realises that he loves his Chachaji, and he asks for his friends’ help to save him. They all surround the wolves and fight them off. Even Chachaji helps them in the massive fight against the howlers.

Source: ZEE5Guddu’s Chachaji bids them goodbye, and they all wish him a happy journey with a heavy heart. The next day, Guddu is seen jumping in a stream of water. He is about to leave, when a small fish jumps out of it, and asks him to help her. The flowerhorn fish, is being chased by eels. Guddu dives inside the water without a second thought, and gives the eels a tough fight as they rush away. But Guddu and his friends receive a few shocks from the eels in the due course of events! Guddu saves the little fish and asks her why the evil eels were behind her. The fish tells him that her name is flowery, and she has set out to find a special and powerful diamond for the jalrani.

Guddu and his friends help the little fish, but when they hand her the diamond, she places it on her forehead and turns into a large fish. She reveals her true intentions and tells them that she wanted to be the jalrani, and now she would rule over the underwater fish kingdom!

Are you also marveling at the adventures of Guddu and his friends? Then you should definetly watch Guddu streaming on ZEE5 now!

Shaan Grover Of RejctX 2: I Play A Rich Boy Who's The Heartthrob Of Jefferson World School