Hacked Movie Review: This Psychological Thriller Will Set You On An Adrenalin Rush! 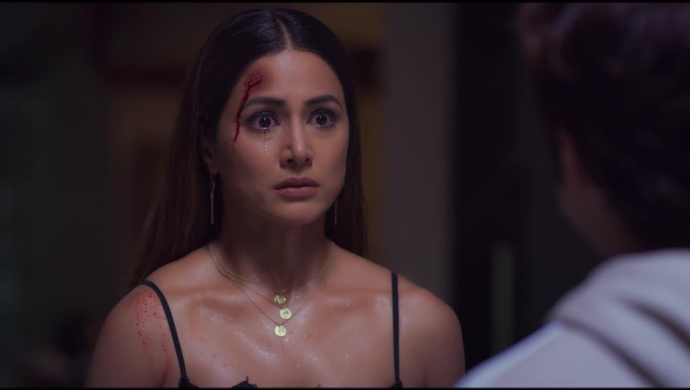 Hacked is sure to keep your eyes wide open! Though it isn’t a fast-paced film, the psychological thriller will set you on an adrenalin rush with its brilliantly cut scenes. Hina Khan stars as Sameera Khanna, nicknamed as Sam, who works at a fashion magazine company. She is in a fragile relationship with actor Om Kapoor, played by Sid Makkar, who is having an extramarital affair with Sam. Things go south when Sam’s neighbour and good friend Vivek, essayed by Rohan Shah, expresses his obsessive love for her and gets rejected for being merely 19-years-old. Starting from her office laptop to all her social media accounts, Vivek hacks Sam’s entire life and leaves her with #NowhereToHide! Read more for the full movie review.

But first, watch the spooky and thrilling trailer here:

One thing is absolutely true and that is Sam’s dialogue, “Shaitan ki koi umr nahi hoti!”, which translates as “The devil has no age!” Descending back in time, the story starts at a police station with witnesses testifying about Sam and Om. Nobody knew what went wrong exactly until Sam brilliantly used Vivek’s own strategy against him to shut the case. Seeing Sam go from a chicken-hearted person begging for love to a brave tigress with a sharp mind is a pleasant sight to watch! Every woman can relate to that pivotal point of transformation in her life situations.

With his acting skills, Rohan Shah convinces you that 19-year-old sociopaths and psychopaths like Vivek exist. As his character graph moves forward, his evil intentions go from bad to worse. Coming across as a good friend and helper, he later reveals himself as a hacker when he leaks confidential information from Sam’s office laptop and causes a huge loss to Parade, the magazine company where Sam has a Chief Editor’s position. Sam is fired by her boss Nandini which aggravates Vivek to use Sam for her own destruction even further!

One tight slap across Vivek’s face leads him to shoot up the devil inside him. He makes Sam’s life hell by cyberstalking, cyberbullying and emotionally blackmailing her all at once. Rohan Mehra, portrayed by Mohit Malhotra then helps Sam to crack his cruel code. The scene at Wellness Hospital wherein Sam confronts Vivek is where the true face of the dark world of cybercrime comes out. All our private information is on the internet without which we cannot live in the current age! There’s #NowhereToHide because anti-social criminals like Vivek have an eye on you.

Vikram Bhatt tactfully directs the scene at the gas station turned hacking booth wherein Vivek discloses how CCTV footage can be doctored to deceive the police or investigators. Sam rises to immense strength in the action sequence when she uses Vivek’s own tricks against him and gives him the ultimate punishment for all his crimes in the past, i.e., Sheetal’s abetment to suicide and sex favours by Rhea. Life turns a fresh page for Sam on which can write her own new business and a happily ever after with Rohan Mehra. So, there’s hope always!

Don’t forget to watch the riveting story of modern technology affecting lives in the movie Hacked, streaming now on ZEE5!