Half-Full Review: This ZEE5 Short Film About Suicide Will Lift Your Spirits, Trust Us

Naseerudin Shah and Vikrant Massey put in effortless performances in this short film that will uplift your mood in this gloomy time. 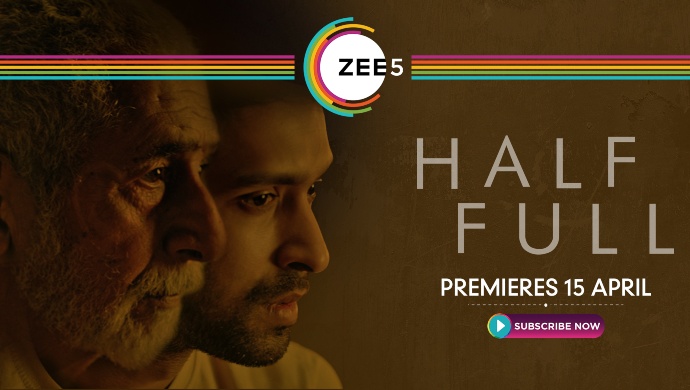 Half Full was awarded the best film at ShortsTV’s Best of India Short Film Festival 2019 in Los Angeles. This fact wouldn’t surprise you once you have watched the film. This 12-minute film is a must watch for handling the tough subject of suicide and suicidal tendencies very tactfully. Vikrant Massey from the hit web series Broken But Beautiful stars alongside Naseeruddin Shah who has worked in a number of films including a special appearance in the Marathi film Nude.

Watch the trailer for Half Full here.

Vikrant Massey plays the role of Abhay Khanna who is depressed with his life. He feels that he has reached the age of 30 and not achieved anything yet. He is also certain that nothing good is going to come out of his life so he plans to kill himself. However, 20 minutes before he is ready to commit suicide, he is visited by another Abhay Khanna whose Mercedes breaks down in the rain and tries to find help from the nearest house. The rich Abhay finds out that the young Abhay is on the verge of committing suicide and thus begins their conversation.

With a cast of Naseeruddin Shah and Vikrany Massey, this film could hardly go wrong. The film is centred on their conversation and every dialogues is crisp but more importantly natural. Vikrant Massey shines in his role as a nervous man who is sure about committing suicide but also secretly wants someone to talk him out of it. Naseeruddin Shah’s character has an air of mystery about him that gives the movie a surprising climax.

A special mention must be given to the lighting which keeps the room a gloomy yellow throughout the entire duration of the film. The dialogues of this film draw humour around the events of the suicide and never on suicide or the victims itself which is a fine line. Watch this film to spend 12 minutes in uplifting your mood in this gloomy time.

Watch the newly released series ‘Phone-A-Friend‘ about a phone that comes to life, streaming on ZEE5.

Juhi Chawla To Manoj Bajpayee, Did You Know They Are The Voices Behind 'Krishna Aur Kans'?