Doctor Chanchal Udas gives laughing pills to Happu Singh to control the situation at his home. 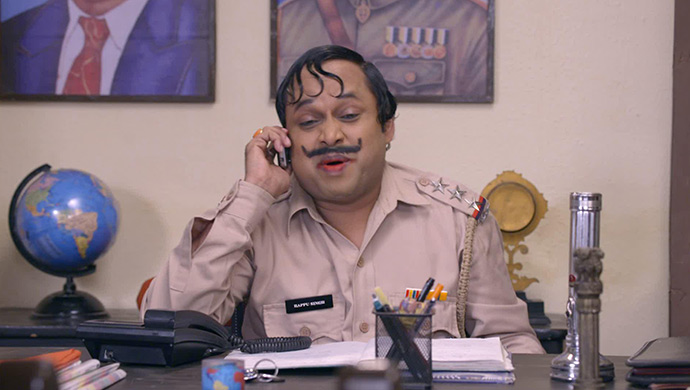 In the previous episode of Happu Ki Ultan Paltan, Happu takes advice from the doctor Chanchal Udas and comes home acting as if he is angry. He starts scolding Rajesh for not being a responsible wife who cribs about every single thing in life. Seeing this, Amma tries to cool him down saying he should take some rest, Happu talks rudely with Amma too saying she is the reason for all the mess. Happu in his anger hurts Beni too and later at night he comes at Beni’s house to apologise to him saying it was all drama to keep both the ladies in control.

In tonight’s episode, Malika and Kate are waiting for Kamlesh as Malika somehow managed to convince Kamlesh to sort out the fight. Kate apologises to Kamlesh saying she never meant to hurt him. But this time, Kamlesh is in the mood to stretch the argument further and because of this both of them start fighting all over again.

As instructed by Amma, Happu goes to his bedroom and tries to make Rajesh angry but she sees that Malika is recording her from a corner and smartly behaves as if she is not angry at all. Even after Happu telling her that Amma is way smarter and intelligent than her, she doesn’t react. The moment Malika stops recording and moves away, Rajesh starts beating Happu and tells him that he has to make Amma angry to prove her point.

Happu goes to Amma and tells her that Rajesh’s mother Avadhesh is way smarter than Amma and he loves the food cooked by her. Amma is about to get angry but sees Malika recording her from a corner. She controls herself and agrees to everything that Happu says. Seeing this Malika thinks that both the ladies have smartly controlled their anger as they saw her recording them.

At the police station, Happu sees Dr Chanchal Udas who has come to the police station badly injured. Upon asking what is the reason, he tells that his wife has beaten him. Happu starts laughing and asks him how did he manage to cool down his wife. The doctor tells he did it using the Laughter Pills and her wife despite being angry started laughing. Happu immediately gets an idea and asks the doctor to give those pills him so that it will be helpful for him to manage the situation at home.

Will this laughing pill work for Happu? Or will it backfire on him like the previous advice of the doctor?

Meanwhile, you can catch Priyanka Chopra’s movies on ZEE5.

Watch Emraan Hashmi Starring A In The ZEE5 Original Tigers

EXCLUSIVE! Aahana Kumra: I Have Promised Myself That I Don't Want To Repeat Characters