In tonight's episode, Rajesh borrows a saree from Amma and burns it by mistake. 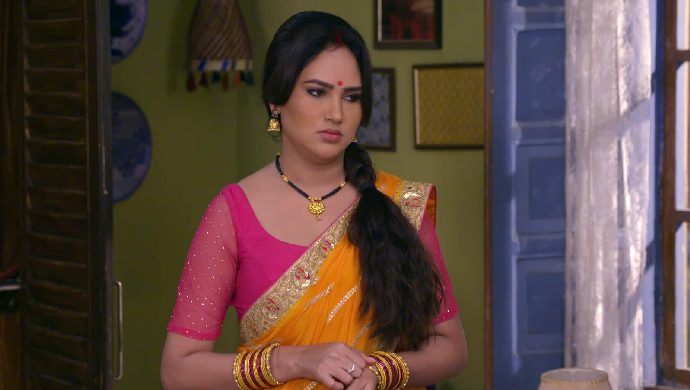 In the previous episode of Happu Ki Ultan Paltan, the commissioner tells Happu that the same car driver hit him again and fractured his other leg. Hearing this Happu gets shocked and informs Rajesh about it. Later that day, Rajesh’s friend comes home to take her car. The commissioner asks her the details of the car and gets surprised to know that its the same car that hit him. Seeing that everything is turning bad, Amma and Rajesh admit that they hit him and ran away.

In tonight’s episode, Happu is in a romantic mood and sings a song for Rajesh, while she reminds him of her friend’s marriage and they have to go there in the evening. She complains that she doesn’t have a new saree to wear for the wedding as all her friends will be flaunting their new sarees. Happu strictly refuses to buy her a new one.

Later, Rajesh gets an idea to borrow a saree from Amma and wear it for the wedding. She makes her a sweet dish and tells her about the situation indirectly. Amma agrees to give her the saree but instructs her to be careful with the saree because it’s her most favourite saree which Happu’s father had gifted her. Meanwhile, Kate comes to know about one of her friend who went out for a movie with her guy friend and he tried to kiss her forcefully.

After returning from the wedding, Rajesh is happy because she could flaunt her saree amongst her friends. While ironing Amma’s saree, Happu comes there and holds Rajesh in his arms. He says that he is in a romantic mood. Just then both of them smell that something is burning. When Rajesh turns around, she sees that Amma’s saree is burnt.

The next day, Amma asks Rajesh about returning the saree but she lies to her saying that she has given it for dry cleaning.

What will happen when Amma gets to know about the saree? Let us know your thoughts in the comments with the hashtag #HappuKiUltanPaltan.