Nargis Mausi is back and she again tries to manipulate Amma by telling her to keep a check on Happu. 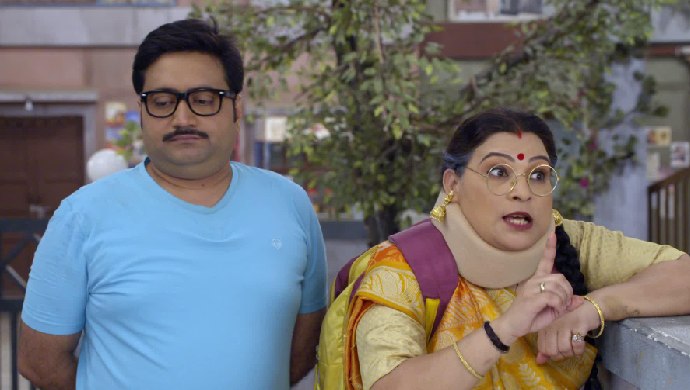 In the previous episode of Happu Ki Ultan Paltan, Rajesh has a doubt that Amma has got Mama kidnapped through Beni. To see if it is true, she goes to his house and finds out that Happu and Beni have tied Mama to a chair. A few moments later, Amma comes there and sees Prakash Mama. Next morning, Mama makes a video call to his wife Chatto and asks Amma to talk to her. After talking to her sister, Amma agrees to forgive Prakash Mama and the issue gets resolved.

In tonight’s episode, Beni’s Nargis mausi comes to meet him. This time she assures him that she will definitely talk to Amma about his marriage with Bimlesh. Beni gets excited and calls Amma. The moment Amma sees Nargis mausi, both the ladies start talking to each other and forget about Beni’s topic completely. Mausi gives a piece of advice to Amma that if she wants to maintain the happiness in their family then she should keep a check on Happu and make sure that he does not become his wife’s puppet.

Amma gets manipulated and calls Happu and asks him to come home early as she wants to go to the temple with him. He agrees to it and while talking to Amma, Happu gets a phone call from Rajesh. He immediately lies to Amma saying he has to disconnect the call because the commissioner has come. After receiving Rajesh’s call, she tells him that she wants to go out with him and eat ice-cream. Happu gets excited and tells her that he will come on time. Amma hears Rajesh talking on the phone with Happu and learns that he lied to her about the commissioner.

Later the same day, Kate and Malaika are waiting for Kamlesh to drop them to college and tuition respectively. The moment he comes there he tells Kate that is going to act in a movie. He further adds that he would like it if Kate agrees to do the role of the lead actress in the same movie. Hearing this Kate gets overwhelmed and thanks Kamlesh for the opportunity. Seeing this drama, Malaika asks them to hurry up as she has to reach the tuition on time.

Watch Hutatma That narrates the story of how the state of Maharashtra came into existence with Bombay as its capital.