In tonight's episode, we see Happu finding out that Chamchi's face is covered in color. Find out the details inside. 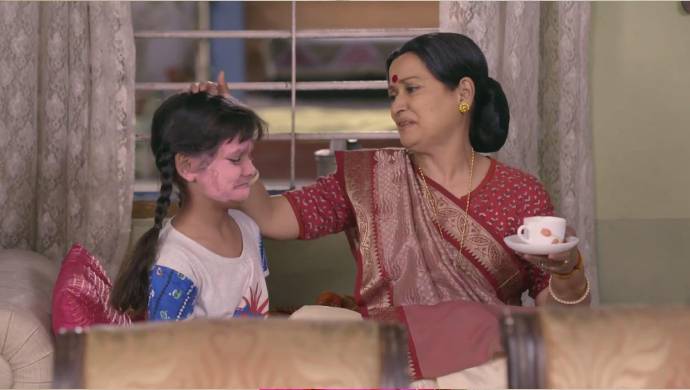 In tonight’s episode of Happu Ki Ultan Paltan, we see Amma shouting at Happu as she finds Chamchi’s face being covered with colors. She asks him what Happu was doing while keeping a watch over the house. Happu realises that only someone mischievous like Hritik can do this. Happu goes away to find him.

After a while, Amma says to Rajesh that she thinks someone who loves Kat must have done this to seek revenge from the latter. Rajesh, on the other hand, says that a lot of boys fancied her, during her college days. Amma tells Rajesh that she also had a line of guys waiting for her. Rajesh taunts Amma by saying that the latter was at the top of her game. A while later, Happu threatens to suspend the constable. Later, Happu catches Makhwana red-handed carrying the same color that is smeared on Resham Pal’s face. Makhwana reveals that he was carrying it to check where the colour is being sold at. He says that this was necessary to catch the criminal. Resham Pal says that he’s proud of Makhwana, much to Happu’s the horror.

Later, Kat goes away from Kamlesh and asks him to not follow him. On the other hand, Kamlesh asks Kat to trust him. Just then, Hritik comes running towards him and reveals that Chamchi has been bitten by a snake. Kamlesh and Hritik then hurry to the place where Chamchi is. Meanwhile, Happu reveals to Benny that he thinks Kamlesh is the culprit. He just wants to gather enough evidence against him.

In the upcoming episode, we will see Happu wanting to romance Rajesh. He says that he knows how to make her mood right. An irritated Rajesh drives him away. Happu falls down from the bed and finds Kamlesh tied up at the bottom of the bed. Both Kamlesh and Happu are shocked to see each other.