In tonight's episode, Happu makes the commissioner bald by threatening him at gunpoint. Find out inside. 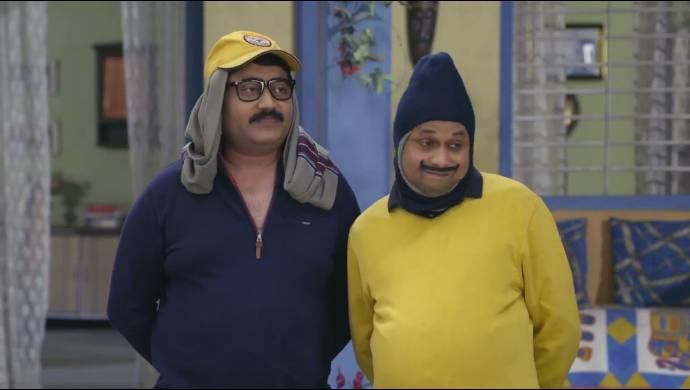 In tonight’s episode of Happu Ki Ultan Paltan, we see Happu getting irritated with his children at the dinner table. Kat and Malaika find Happu’s idea ridiculous which makes the latter furious. Happu, on the other hand, is quite sure that Baba’s advice would work and he would soon become commissioner. Meanwhile, Benny suggests to Happu that he should make the commissioner bald so that Baba’s mantra works. Happu agrees to it and says that he would require Benny’s help in the process. Benny says that he would be helping him only if Happu returns the favour. They both then sneak into Amma’s bedroom while she’s sleeping and draw a moustache on her face. Just then, Rajesh enters and is shocked to see Amma’s caricatured face.

A while later, Rajesh lectures Happu for blindly following the Baba’s advice. She then threatens Happu saying, that she will leave everything and go to her in-laws if this behaviour continues. Later, Happu and Benny hold the commissioner’s servant Manohar at gunpoint and ask him to cut his master’s hair. Manohar senses that his life is in danger and starts cutting the commissioner’s hair with a blade, much to the latter’s horror. At Happu’s house, Amma wonders about who drew a mustache on her face. Just then, Rajesh enters and asks Amma to wash her face. The latter says that she will wash her face only after she finds out who the culprit is. Amma then calls out to Happu who is busy burning the commissioner’s cut hair. Amma, on the other hand, wonders where the burnt smell is coming from and Rajesh tells her about the same. After a while, Happu and Benny enter the courtyard. Amma asks them to come close and slaps them both hard for their act.

In the next episode, we shall see Rajesh and her children messing with Happu, who has now become a commissioner. Rajesh pretends to speak as a dead person, which terrifies Happu. What do you think will happen next? Comment below and tell us. Catch all the episodes of Happu Ki Ultan Paltan exclusively on ZEE5.