Happu celebrates Holi with his family while trying to find out who keeps smearing colour on his daughters' faces! Read on for more details! 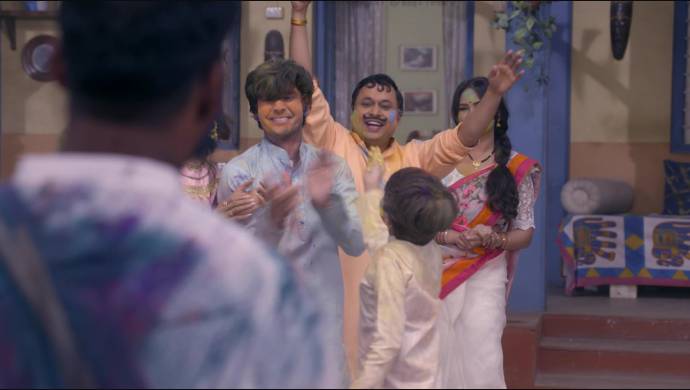 In today’s episode of the show, we see Happu trying to have a romantic conversation with Rajjo but the latter is angry as she wants to know why Happu is not in a state of panic like her. She argues that every day someone is trying to smear color on Chamchi’s face but still, Happu is not worried about what is happening to their kid. Happu tells her that though he is stressed, right now he is not in the mood for this as he wants to have a moment of romance.

Rajjo refuses him. When they are arguing, Happu realizes that someone is under their bed. When he looks down he finds, Kamlesh tied up. He asks Rajjo about it and she tells him that she thinks Kamlesh is the person who keeps smearing colour on their daughter’s face.

On the next day, Rajjo talks with Amma about how her brother bought a huge piece of land and has become a multi-millionaire. Happu intervenes and tells them it is all a twist of fate. When Malaika comes home with a colored face, Rajesh asks Happu if he would be upset if Kat comes home with a coloured face like that. Happu replies that he would kill anyone who dared to do such a thing.

Everyone plays Holi. Amma asks for more bhang, but Rajjo refuses and reminds her of the drama she created after getting drunk last year. Happu seconds her on it and they all laugh. Everyone dances to the songs of Holi as they colour each other have fun.

In the next episode of the show, we will see how Happu’s boss, Police Commissioner Resham Pal has a coloured face and asks for a handkerchief to wipe it off. Happu asks his subordinates to give the handkerchief and when one of them does so, a packet of colour falls out of his pocket, revealing the person behind this prank!

Highly Opinionated: How Many Nirbhayas Or Dishas Will Perish Before I Feel Safe…

Deepika Padukone Had Given A Look Test For Beyond The Clouds. Seen The Pics Yet?

What do you think will happen next? Stay tuned to find out.

Meanwhile, stream all the episodes of the show here!