Happu finds the person who was colouring his daughter's faces! Read on to know who it is! 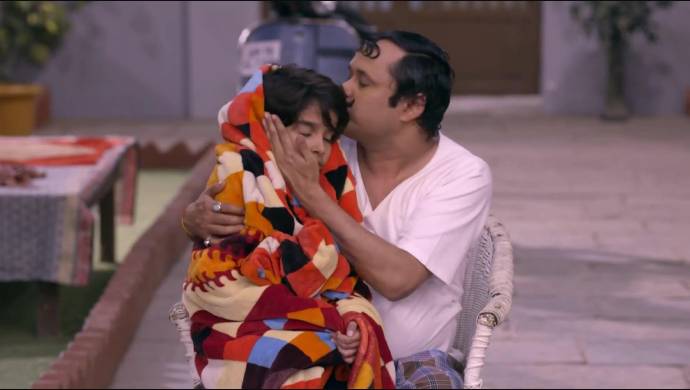 In the previous episode of the show, we saw how Happu wanted to romance Rajjo but she refused. Happu realised that Kamlesh was lying below their bed as Rajjo suspected him of being the culprit who coloured their daughters’ faces every day. But the next day, Malaika came home with a coloured face and Happu promises to punish whoever did it. They all played Holi happily.

In today’s episode of the show, we see how Happu nabs the guy who tries to color Kate’s face. They all hit him and yell at him. Everyone comes together to punish the stalker and they wash the color off his face. They also tell him to stay away, Happu threatens him by saying that he is a very protective father and will gouge out his eyes if he does not behave in the future. The children feel proud of their father.

The next day, Happu’s constable, Manohar, tells him that his Holi was not good as he applied color on his neighbor’s face and ever since, his wife was angry and was not talking to him. Happu tries to advise him about how to make things right with his wife. He tells him that he should try to please her. Meanwhile, Resham Pal comes to the police station and Manohar’s prank makes the former’s face turn yellow with the Holi colour. However, this prank does not annoy Resham Pal and he ends up bursting into laughter.

Happu asks Rajjo to make an omelette for him as they share a sweet moment together. Meanwhile, Rajjo asks her mother-in-law if she has eaten the onion which was on the kitchen counter last night. On the other hand, Malaika is laughed upon for looking like an egg by her sister Kate. Kate gets ready as Kamlesh is about to come and meet her. Rajesh asks everyone to come down and get ready to go to school. But Hritik says that he has a soaring temperature and refuses to go to school. Everyone gets worried about his health.

In the next episode of the show, we will see how Happu and Rajesh have an argument about the latter’s issues at home. Rajesh says that she will leave the house and go to her mother’s place. Happu gets angry and tells her that she should rather go away forever and not come back at all!

Will Happu and Rajjo’s argument boom into a major fight? Find out in the next episode!