Hrithik wants to eat chicken but Amma strictly tells everyone that they should control their desire to eat non-veg. 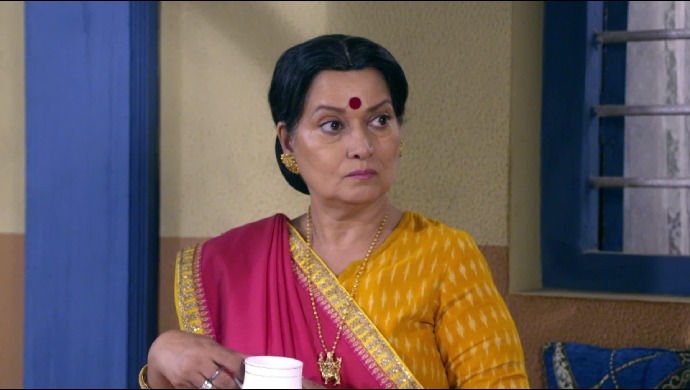 In the previous episode of Happu Ki Ultan Paltan, Rajesh was enjoying Amma’s fake love and care as she bribed Panditji to tell Amma to do so. But when Amma’s friend tries to incite Amma about Rajesh, she tells her that Rajesh is the best daughter in law as she manages to take care of the house all on her own. Hearing this, Rajesh feels bad and asks the pandit to tell Amma that now she doesn’t need to help Rajesh any more.

In tonight’s episode, Happu and his family are having dinner but Hrithik is seen upset. Upon asking the reason, he says that he is sick of eating vegetarian food from the last 20 days and craves to eat non-veg. Happu takes his side and tells Amma that even he is bored with vegetarian foods and wants to eat some tasty non-veg food. Amma refuses to listen to them and strictly tells everyone to control their cravings as the Panditji has asked to eat vegetarian food for a month and it’s just 10 more days to go.

At night, Rajesh tries to convince Happu to manage to get some non-veg food as she can’t resist anymore. Happu tells Rajesh that he can’t help in this situation because if they try to cook anything non-veg then Amma will be aware of it for sure. Next day, Hrithik tells Rajesh that if he doesn’t get chicken then he won’t eat anything. Seeing this, Rajesh promises Hrithik to cook non-veg food for him but asks him to keep it as a secret.

Kate asks Kamlesh to bring some non-veg snack for her but while they are about to eat it, Malika comes there and starts beating Kamlesh. He tells her that it was Kate’s idea to bring her non-veg food. Malika warns Kate that if she does it again then she will complain Amma.

Later that day, Amma gets a call from a person who has brought parcel for her. He tells her that Atbir Mama has sent a chicken(pet) named Babloo. While all the family members are craving for chicken, will the chicken who has come as pet survive in Daroga house?

Bhoot Purva revolves around Aarav, a ghost who comes back to win over his lady love Angelina, with the help of his human friend Purva

Saumya Tandon: I Feel I Could Have Done Nargis Fakhri's Role In Rockstar Better

Happu Ki Ultan Paltan 14 May 2019 Preview: Babloo The Chicken, Is In Danger