Rajesh is fed up of being mistreated, and threatens to go to her mother's house. A friend suggests she act possessed to win sympathy from her family. 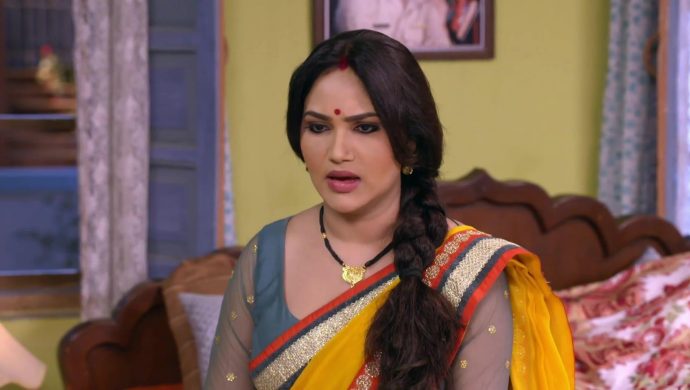 In today’s episode, we will see how Rajesh is upset as everyone has eaten and left the dinner table and she has to eat alone. Meanwhile, Happu applies perfume all over himself and dances with a pillow to an old romantic song. He waits for Rajesh but dozes off. On the other hand, Amma asks Rajesh about her depressed state. The latter tells her mother-in-law that she is not distressed. In her thoughts, she speaks to herself about the futility of sharing her woes as no one cares about her.

Meanwhile, Happu asks her to romance him and this makes Rajjo lose her temper. She tells him that she is angry as all day long she has to tend to his mother’s needs and then the children’s needs and then even his needs. She tells him that she is tired of all this and needs a break. Happu tells her that he is at the police station all day long and does not know of her plight!

Happu asks Rajjo to go to her maternal home and live there for as long as she wishes to. She asks him who would take care of the children, to which Happu replies saying they would look after themselves and no one would miss her after a couple of days. Rajjo gets sad hearing this but resolves to teach him a lesson. The next day, Rajjo tells her mother-in-law about how Happu asked her to leave for a couple of months. Amma scolds Happu in front of Rajjo and this makes the latter happy.

Amma later tells Happu that she did so on purpose to make Rajjo feel better. Meanwhile, Resham Pal tells Happu that he is not okay and Happu decides to help him. Rajjo’s friend tells her that whenever she felt like she was being mistreated, she would act as if she had been possessed! Her mother-in-law and husband then would make her feel like a queen and try to help her with the chores. She even tells Rajjo that she does it on a regular basis!

In the next episode, we will see Rajesh try to follow her friend’s advice and act as if she has been possessed by the divine goddess! Will this work in her favor? Stay tuned to find out!