In tonight's episode, Happu comes with a sword and asks Amma and Rajesh to divide him into two equal parts. 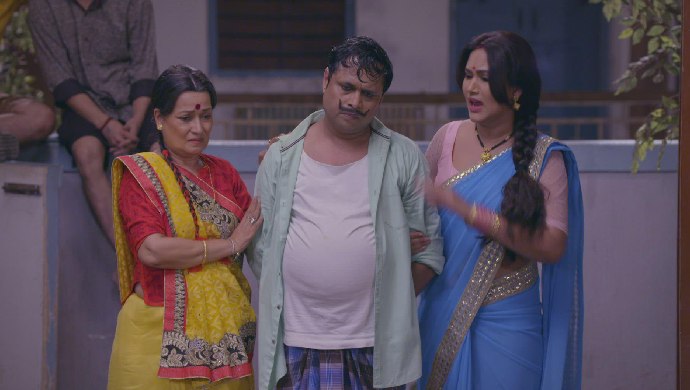 In the previous episode of Happu Ki Ultan Paltan, Malaika asks Ayushman to add Jamalgota in the pastries. Chamchi and Ranbir think that Ayushman is taking the pastry for Hrithik so they stop him. Ranbir being over smart eats the pastry there itself. A few moments later, he feels something is wrong and goes to the bathroom. Hrithik opens the door and teases him. Amma calls Rajesh and says that they should not include the children in the fight and both of them should allow each other in their area for some time.

In tonight’s episode, Happu sees Rajesh, Amma, Hrithik, Malaika, Chamchi and Ranbir are not having dinner. Upon asking the reason, he comes to know about all the incidents that happened in the house. He gets angry and goes to Beni’s house.

Beni gives him a solution to resolve the matter. Later at night, Happu comes with a sword and asks Amma and Rajesh to divide him into two pieces. Hearing this, Amma and Rajesh realises their mistake and apologise to Happu. Amma tells Beni that she wants to transfer her property on Rajesh’s name but Rajesh says that she will never let this happen. Both women start arguing with each other again.

Laal Ishq: 7 Terrifying Tales Of Creepy Creatures That Aren’t For The…

5 Scenes From Laila Majnu That Completely Moved Us

Next day, Amma asks Khodilal why was he coming to meet from the last few days. The latter tries to divert the topic but fails to do so. In the evening, Rajesh asks Happu what will he gift her this Karwa Chauth. Happu says that he will keep a fast for her.

In the preview of the next episode, Amma tells Rajesh that on the day of Karwa Chauth her they have to do a ritual for her mother-in-law’s peace.