Happu calls Beni and asks him to go to his house and try to convince Rajesh and Amma to stop the drama. 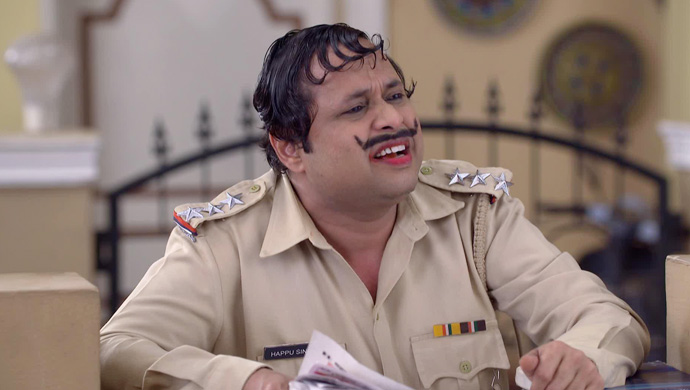 In the previous episode of Happu Ki Ultan Paltan, Happu Singh comes near his home and calls Beni for help. He then asks Beni to come with him in case the situation goes out of control then he can divert the topic and save Happu. While having dinner, Rajesh cracks a joke to which Happu stars laughing, seeing this Amma tells Happu that it was a bad joke and taunts Rajesh. Both Amma and Rajesh continue to fight over the same thing again and again and Happu has to do act of laughing on their bad jokes.

In today’s episode, Kamlesh comes to Kate and Malika’s bedroom through her balcony. He is seen dressed in Yamraj costume, while Kate is waiting for him dressed as Savitri. Malika is then about to beat Kamlesh but then he requests her to not beat him as he is playing the character that needs to be respected.

On the other hand, Amma taunts Rajesh while she is doing the household work. Rajesh and Amma again start having a fight over the same topic of being the funniest in the house. They call Happu to decide the same. Happu who is fed up of listening to this conversation tells them to stop fighting over being the funniest and concentrate on work and 9 kids.

After going to the office, Happu gets a call from Amma saying his wife is being rude with her and asks Happu to decide whose sense of humour is best. Happu agrees to it and just then gets a call from Rajesh telling him to make a decision that who has the best sense of humour. Happu then promises her that he will come home and decide it.

Happu then calls Beni and asks him to go at his home and try to convince Rajesh and Amma to not to think about being the funniest in the house.

Will Beni be able to convince both of them? Keep watching to know more.

All You Need To Know About Kalaripayattu, Shown In Action Film Commando: A One Man Army