Rajesh turns into Chimti Maiyya and performs a miracle! Find out what it is in this episode of the show. 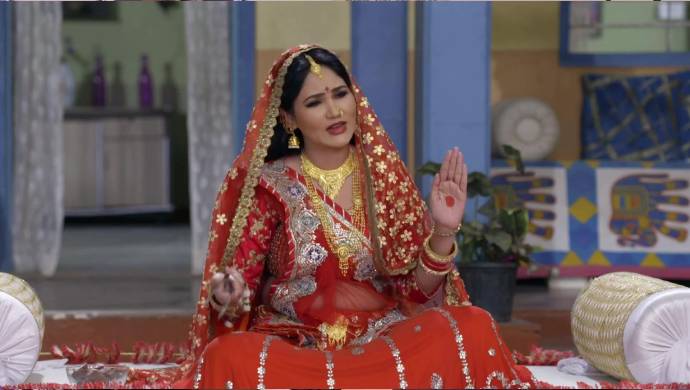 In today’s episode of the show, we will see how Rajesh dresses up as a goddess and appears in front of their family. Hritik and Malaika are supportive of this act and play along with her. They also include Happu’s father in the drama as he is appreciative of the way Rajesh has decided to teach Happu and his Amma a lesson.

We see how Rajesh appears as Chimti Devi and her darbar is set in the open area of their house. At first, Happu and Amma refuse to accept that Rajesh has become a devi but Rajesh plans to scare Happu with her rudra avatar and this leads to both Happu and his Amma believing her.

Resham Pal listens to Chimti devi’s advice and drinks a concoction offered by her. Miraculously, Resham Pal is freed of his disease and he is able to walk and stretch freely. Everyone hails Chimti Maiyya. Meanwhile, Happu and his Amma have to cook and take care of other chores. They feel that it has become difficult for them. As Rajjo is revealing the secret to her friend who had advised her to become the goddess, her daughter Chamchi eavesdrops and find out the truth!

In the next episode, we will see how Chimti Maiyya scolds Happu and his Amma for backbiting the goddess and threatens to curse them if they continue to misbehave!