In tonight's episode, Happu comes to know about Kate and Kamlesh's argument. 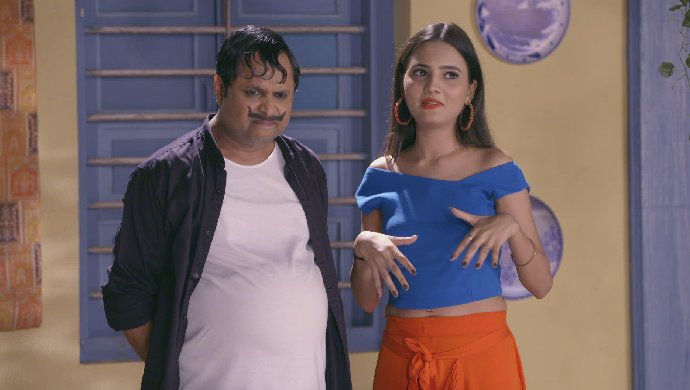 In the previous episode of Happu Ki Ultan Paltan,  Amma returns home from Atbeer Mama’s place. Rajesh is surprised to see her because she did not expect her to return so soon. Upon asking the reason, Amma says that she was missing the kids. Later that day, Chamchi tells Amma about Kamlesh and Kate’s fight. A few moments later, Kamlesh comes home to meet Kate but Amma asks Malaika to drag him out of the house. Kate sees Kamlesh from the window and feels bad.

In tonight’s episode, Happu returns home and goes directly to his bedroom to meet Rajesh. Amma walks in without knocking the door and the situation gets awkward as she was unaware of Happu.

Next day, Happu comes to know about Kate and Kamlesh’s argument. Rajesh tells him that it was her plan to restrict Kate being friends with Kamlesh. Happu notices that Kate is upset for losing her friend. He tells her that she needs to concentrate on her studies if she wants to become a doctor. The latter says that she wants to become an air hostess.

In the evening, Happu brings a letter saying it is from Rajesh’s father which says that he wanted Kate to become an air hostess. With this, the problem gets solved and Happu allows Kate to be friends with Kamlesh. A few moments later, Kamlesh comes home drunk. Seeing this, Happu gets angry and again restricts Kate from being friends with Kamlesh.

In the preview of the next episode, Chamchi and Ranbir attack Happu with a bow and arrow. Upon asking the reason, they wish him happy Dussehra.

Ravi Dubey Reveals He Used His Own Wardrobe For Jamai 2.0, Says "Siddharth And I Are Same"